D23, the official fan club of the Walt Disney Company, stopped in Newark on Saturday for Fanniversary 2013. The Fanniversary is a presentation touring ten cities in the US celebrating the milestones of all things Disney that will occur in 2013. This year’s show highlights included rarely seen concept art from unproduced short “Mickey’s Toothache” as well as bringing along a pumpkin used in the production of Tim Burton classic The Nightmare Before Christmas (which is turning twenty this year.)

As well as discussing the anniversaries reached of major properties such as Peter Pan turning sixty, the show shined a light on some more obscure Disney features and attractions. For example, the D23 audience was shown concept art from Norway attraction, Maelstrom, which is turning thirty this year having opened in Orlando’s Epcot theme park in 1983. Given the scope of the company, it was up to a small team of Disney archivists to narrow down what makes it into this ninety minute show.

Enthusiastic hosts Justin Arthur, a Disney archivist, and Billy Staneck, web editor for D23.com and writer for the

D23 Magazine talked with MediaMikes after the presentation about what goes into making the show as well as the work of the Disney archives.

BILLY STANECK: “I love the Fanniversaries because we get to celebrate all these great shows and attractions that we don’t normally get to really talk about, you know? And that also gives us the opportunity to go into the archives and open up boxes that were stowed away back in the 1970s or 1980s or even you know, just a couple years ago. We’ll open them up and start going through them and looking for things that we think our fans might like. And so that’s where we come up with these old clips and concept art…Like the concept art for Mickey’s Toothache that you today.”

MediaMikes: Was there anything that had to get cut out of today’s show?
STANECK: “We had so much content for this presentation that we had to cut and cut and cut because there’s only so much we can do– we do about a ninety minute presentation, because it is a touring show that you know, we can’t do eight hours in each city. We have enough content to do that but we had to end up cutting quite a bit. We actually had some Pirates [of the Caribbean: The Curse of the Black Pearl, celebrating it’s tenth anniversary in 2013] stuff in there.” 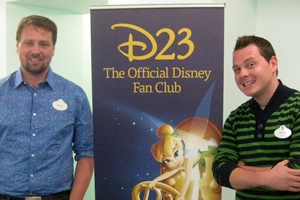 MM: Was there anything that you thought must be kept in the show?
JUSTIN ARTHUR: “One thing we didn’t have in the original show was Maelstrom, the Norway attraction, and I think it is the most bizarre, wonderful ride. I originally said ‘We need to have everybody quote it!’ but the people on the west coast may not know it…That was one I was very adamant about. I know Billy and I were both very adamant both Roger Rabbit [turning twenty-five in 2013] and Nightmare Before Christmas having plenty of stuff to show people. Because those were two of our very very near and dear favorites. And sometimes too it depends on what we have that’s cool to show. Something might be a great movie or attraction and we may not have a great clip or a really great artwork to accompany it. So it kind of depends on what we have and what we want to get out there and show.”

MM: Besides D23 presentations, what is a day-to-day task of the Disney Archives?
STANECK: “Whatever movie they’re working on at the studio, the archives is there to help them make sure that information is accurate. Like Saving Mr Banks that they’re doing with Tom Hanks as Walt Disney that’s coming out for Christmas, they all came into the archives to do research with an archivist. So stuff like that. Disney Epic Mickey [for Nintendo Wii] they went into the archives, they did a lot of research…We also have a massive photo library where people are constantly requesting images from.”

MM: With Disney’s acquisition of Star Wars & Marvel does the archive suddenly get annexed?
ARTHUR: “It kind of depends. The films as they come along, we do take in more of those 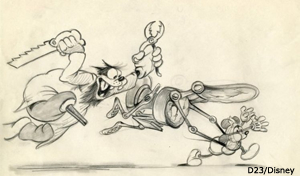 things, they are our films at this point. As far as the research side of it, the book side of it…we collect everything, it just adds on to all of things that we’re looking out for…I’m a huge geek of all those things, so for that I’m very thankful!”

MM: Important fan question, what is your favorite Disney ride or attraction?
STANECK: “I love Roger Rabbit’s cartoon spin at Disneyland, it’s one of my favorite attractions, it’s unique to Disneyland and it’s just such a cool, fun ride. I love that movie.”
ARTHUR: “Oh that’s a tough one, there’s so many! Um…I love the Indiana Jones Adventure.”

MM: Another Disneyland one!
ARTHUR: “I grew up on the east coast so let me pick a Florida one too! I love Expedition Everest. I think it’s one of the coolest rides ever. It’s terrifying, it’s beautiful, it’s just kind of the perfect attraction.”