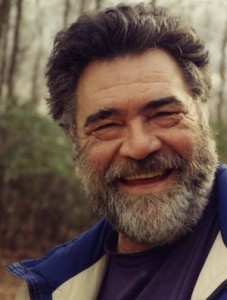 Ralph Bakshi is one of the last great animators in the business and also a good friend of mine.  He has created some really classics films like “Fritz the Cat”, “Wizards”, “The Lord of the Rings”, “American Pop” and many many more.  Ralph is trying to get his last his latest film, “Last Days of Coney Island”, started with the help of Kickstarter and his fans support. The film is planned to be “an animated cop, mafia, horror movie set in the 1960s in Coney Island, with political overtones both realistic and outrageous”. Sounds awesome right?

This is Ralph’s first and hopefully not last attempt at cr0wd-funding.  At the time of posting, there has been over 900 backers since it was launched and about $140,000 dollars pledged of the $165,000 dollars goal.  We are almost there but we need your help. Be sure to rush over to Kickstarter and help Ralph on this project and be sure to mention Media Mikes sent ya!. He is a man who fights for hand-drawn animation in an industry that is fighting against him. Click here to join the fight and see “Last Days of Coney Island” get made. The campaign ends on Sunday March 3rd around 12pm EST, so don’t miss out! Spread the word!

Check out our interview with Matthew Modine who recently joined on the film, click here.

Mike Gencarelli: Tell us about you decision to use Kickstarter for “Last Days of Coney Island”?
Ralph Bakshi: I am 74 years old and I didn’t want any trouble. I figured I would try and raise the money if I could and that way I would be able to do what I wanted. I am not looking for anything major. If it turns into something more like five shorts then I would be more than happy. But I have my freedom, as you can see and I am not bothering with anyone. I do not have to show around storyboards and scripts. It is really a great sense of freedom. We got a lot of push from fans, which is great. We even got a new large donation from a Formula One racer, since he said he grew up with my movies. I am amazed by that. I am really looking to the internet here. I would like to spark an audience reaction to find out what they think. I am not going to get big money online but I will still get to make the film I want.

MG: On the Kickstarter page, it lists the film as “Part One”. You mentioned there will be more? 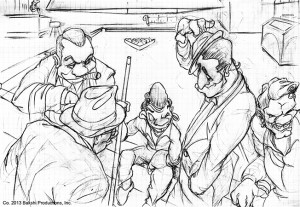 RB: That is right. I will just keep going with the shorts. Also remember they are also pilots. If I get part one done, Hollywood will realize that this guy has a nice following and he is not dead, that is number one. Number two is that if I do something really cool, I can show it to somebody and have them finish it for me, like a promo real. That could always happen.

MG: Tell us about the involvement of Matthew Modine and how that came about?
RB: I just got this email from Matthew Modine. He loves animations and grew up with my films. He said he wants to come help me and came on as a producer. He will also be voicing a character called Shorty, who is very fun. Modine is great though and he has helped me out a lot. We got hundreds of news stories when Matthew Modine came on board. It has just been amazing. Kickstarter made people realize that I am not dead and it has helped quite a bit since we all know that Hollywood is all about hype.

MG: How do you feel your style of animation stands up in today’s times?
RB: My animation isn’t perfect and that is what companies like Disney they strive for…that perfection. I would love to do perfect animation but what that takes is money. So the perception in the industry is that my stuff isn’t good enough. Animation isn’t about perfect. Art isn’t about perfect. They take it too seriously. I am not perfect and they hold it 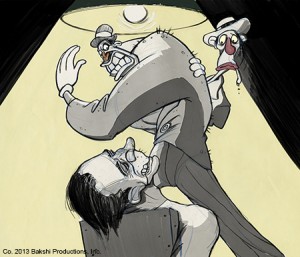 against me. Uncle Walt wants perfect. I can’t. You can’t be perfect with $1 million dollars.

MG: What has been your biggest challenge that you faced with trying to get the word out?
RB: There has been a lot of support from fans, yes. But you look at the animation blogs, they are all taking to each other and no one has Bakshi on there. Let’s talk about Cartoon Brew, they have not mentioned a word about the Kickstarter for “Last Days of Coney Island”. They also never put up my last cartoon “Trickle Dickle Down” either. Now, I am a 74 year old animator who has been around for a while and has fought for animation over the years. Look, we are trying to do a lousy five minute cartoon. Yet they will not assist with us on this project. I am more shocked and upset out of amazement on this, but I am not bitter. If I succeed in “Last Days of Coney Island” doing hand-drawn R-rated film, which is possible not probably…but possible. If I get to make this into a feature and its makes big money like “Fritz the Cat”. All of Hollywood is going to say “Oh my God, hand-drawn and R-rated?” and everyone would be put back to work. So we may make it…we may not. It is very close.

MG: I have to ask what are your plans if funding does not meet your goal?
RB: I don’t have a backup plan. If I don’t reach the limit, then I don’t reach the limit. I would have had a good time. I am trying hard. But I am not going to go crazy. If the guys don’t support me then I won’t do it. If places like Cartoon Brew don’t want to mention that I am out here fighting for animation, especially since they are all for animation. Remember they get their ads from Pixar, Disney and Dreamworks and they realize that I am at it again doing stuff that those guys can’t do because of their family audience. So they don’t mention me. I just won’t do it then. I don’t want anyone to think I am angry. I am very proud. We raised a ton of money. 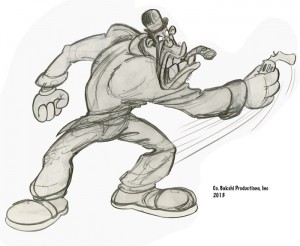 MG: Tell us about your team you’ve you have working with you right now?
RB: I have hired some great young animators. I got this Japanese guy from Brooklyn. He sent me his reel and they are very crude and very honest. I emailed him and gave him some work to do. I later found out that he was living on the streets in Brooklyn. He has all his drawing up on my Kickstarter page. His name is Tsukasa Kanayama. He is such an amazing guy. I also got this woman, Colleen Cox, who taught herself how to animate. What I am saying is that I love working with these young animators. I see the passion through their eyes and its reminds me about my own passion and what it is like to be young and have that drive. One of my animators JoJo Baptista is using Toon Boom Studio to work on the animation, which is 100% 2D. With this program, you can draw on paper and scan into the software. Toon Boom colors and does the in between. It works great. As the director, I want it to look like hand-drawn animation and they are and using this software to fill in the necessary in-betweens. Also My son Eddie Bakshi is producing and breaking his ass. He is taking on a lot of hard work and the Facebook stuff, which is beyond me. So we have a wonderful team and we are just waiting to see if this will work out.