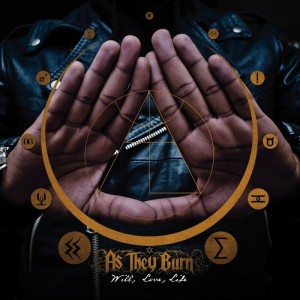 As They Burn
“Will, Love, Life”
Victory Records
Tracks: 11

“Will, Love, Life” is the debut Victory Records release from French metal band As They Burn. The group’s line up consists of vocalist Kevin Trevor, Hoby Arinoky- guitar, Fabio Meschini- guitar, Ronald Pastor- bass, Milton Bakech- drums and Bastien Jacquesson on machines. Together the group brings their own unique blend of modern nu-metal spread across 11 all new tracks mixed by Jason Suecof (All That Remains, Trivium, Motionless in White).

If Slipknot was to come out today minus the masks and crazy samples you would have As They Burn. The band’s music is brutally aggressive and features intricate melodic undertones that provide a solid structure for the songs to take shape around. Tracks such “Isis” and “When Everything Falls Apart” jump right out of your speakers almost severing your eardrums with their sheer power while tracks such as Vision Part 2” and “Frozen“Z(h)ero” feature more laid back arrangements that while melodic in approach still have the power to jump up and bite you at any moment. Vocalist Kevin Trevor covers a lot of ground as he is able to take his voice from a stomach churning growl to an eerie drone while the rest of the band is equally technical. When you think of Paris, France you may not think of heavy music however As They Burn sets the record straight with their approach to the ever growing genre.

One Reply to “CD Review: As They Burn "Will, Love, Life"”