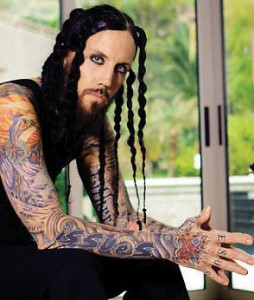 Brian “Head” Welch is a founding member and former guitarist of the multi-platinum selling hard rock band Korn. Welch left the group in 2005 and embarked on a solo career releasing his first album “Save Me From Myself” in 2008. More recently Brian is back with a new band called Love & Death who recently released their first full length album titled “Between Here & Lost”. Media Mikes had the chance to talk with Brian about the new and as well as the recent announcement of him re-joining Korn for several shows.

Adam Lawton: Can you give us some background on the process of the new album?
Brian Welch: I and our bass player Valentine started writing and working with producer Jasen Rauch in 2011. We worked off and on until we finished it last year. The album came together in bits and pieces but it was more of a group effort. When I started as a solo artist I hired the band and we just became friends. From there we all talked and decided we wanted to make an album together and have things be more of a group project.

AL: All the songs were written collectively then?
BW: Yes we all wrote them together. We also had some help lyrically from a few outside writers as well. This was the first time I had ever brought in someone from outside the group to work on songs. I have to say I loved it! There are times when other people hear different things that you didn’t and a lot of the time it’s really good. I enjoyed the experience. Lyrics aren’t my strongest thing so bringing in some other guys really helped a lot.

AL: For you personally what was the hardest part about transitioning back to a group setting after being a solo artist for a few years?
BW: Letting the producer take over. The solo album 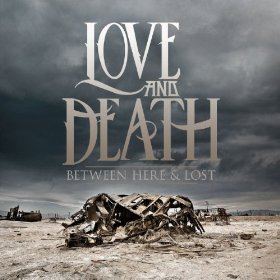 was all about what I was feeling and what I wanted out of the album. With “Between Here & Lost” I just handed everything over as I didn’t want that producer type role. Jasen was just awesome and I would highly recommend him to anybody. He is really good at making good things great! Everything was new this time around which made for a really creative environment.

AL: This was the second time you had worked with Jasen correct?
BW: Yes. We did an EP with him last year that came out in April. Things were very comfortable being that we had worked together before. Jasen is a guitar player also and has this great ear for making riffs sound up to date and tweaking them to sound really great.

AL: What prompted the idea of covering Devo’s “Whip It”?
BW: I was trying to think of the weirdest New Wave song I could do and that one came to me. I remember those guys as being the weirdest guys on MTV back in the day. It seemed like everyone knows who Devo is because they are so weird and those hats. I wanted the song to be something everyone was familiar with. At first the other guys in the band thought the idea was pretty stupid. When I played them the music and the idea it changed their minds and they thought it could work. It was really fun.

AL: What can you tell us about the bands new video for the song “Abandoning”?
BW: The video just came out within the past week or so and it was cool shooting it as we got to work with Daniel Davison from Underoath/Norma Jean. Being he is a musician he just gets it so the shoot went really good.

AL: Can you tell us how things came about for you to be joining Korn at this year’s Rock on the Range Festival?
BW: I went to a show of theirs last May and ended up jamming a song with them on stage. It was very last minute but it felt so good and it was very emotional. Right after that Munky, the other guitar player asked me if I wanted to come back and do some shows with them. I told him that I didn’t think now was the right time but I would think about it. I just started thinking about how awesome and emotional it was for everybody. I started getting advice from other people and they were all leaning towards this being the right time. This door obviously opened for a reason and there will be some reconciliation going on that needs to happen. I went back to the guys and 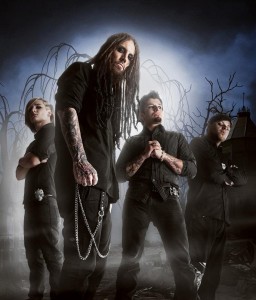 said let’s do it. Everyone was very agreeable and things came together pretty easily.

AL: Is there any chance drummer David Silveria will be back as well?
BW: No. David has really said some crazy things online about personal things and he’s not in a place where people would really want him around. That happened before I talked with them but I guess the things he said were really crazy. Those guys were in a band together for so long so I don’t know, but for now it’s just not going to happen.

AL: Have you and the guys from Korn started rehearsing yet?
BW: We have been getting together off and on but we will be starting to get things going more in the next couple of months. It’s going to be a lot of fun to play those old songs again. The times we have been together so far have been nothing but positive between everyone. It’s like nothing negative ever happened between any of us. Things were never really crazy between any of us as there were just a few things said here and there. We never had hate for one another as I love my old friends and it feels good to connect again.

AL: Is thing going to be just a short run of shows or will you be fully re-joining the band?
BW: We are going slowing with things right now. We don’t want to rush things and we also aren’t sure how far we want to take it. Anything is possible at this time but we are being really careful not to move to fast and have something happen. Even if I was to fully re-join Korn I will still keep doing Love & Death.

AL: Does Love and Death have any shows lined up in support of the new album?
BW: Yes. We will be heading out on the road starting Feb. 22 for a month long run with Thousand Foot Krutch. We will be hitting everything from Texas to the east coast. After that we have some weekend shows planned and after those there is a chance we will be doing some opening slots for Korn over in Europe. Those details are still being worked out. 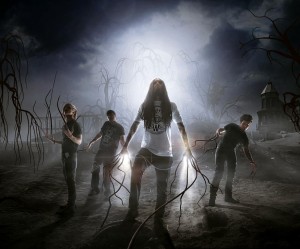 AL: In the past few years you have done things like releasing a solo album, writing a book and now you are doing Love & Death and working again with Korn. What do you think has been the most rewarding thing to come out of your time away from Korn?
BW: I would probably have to say my faith. That is really the foundation of my life and it helps me in every way. My book was very liberating and cleansing to my soul. I was able to poor out all of that garbage and live the new life I was given. It’s funny when you find faith like I did as everything turns around for good. Even the bad and ugly stuff gets turned around to use for good purposes. It’s so cool to be able to think back about all your past screw ups and see how now they are now being used to help people. It’s the coolest thing ever.

To check out Love & Hates new video “Abandoning” and to also see a full list of tour dates be sure to check out Brian’s official website at www.brianheadwelch.net