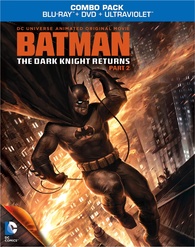 After viewing “Batman: The Dark Knight Returns – Part 1”, I was literally counting down the days till “Part 2”. Well it has finally arrived and holy shit is it amazing!! Frank Miller’s 1986 novel comes to a stunning conclusion. I thought that “Part 1” was amazing but then this film came around and it literally blows this the first out of the water. Peter Weller really kicks some major ass as the aged Batman and while Michael Emerson is no Mark Hamill he does a decent Joker. Batman not only battles The Joker but also The Man of Steel, Superman. Frank Miller really captured the essence of our caped crusader and it has been well represented here.  This film is as epic as they come.

Official Premise: The Dark Knight along with new sidekick Robin have finally reclaimed Gotham City and allowed a ray of hope to penetrate the reign of terror that The Mutants had cast upon his city. With Batman back in the spotlight the extended media coverage has awoken a far worse evil at Arkham Asylum The Joker! Forever destined to be mortal enemies The Joker has a diabolical scheme that may pull Batman down to the darkest levels of insanity. While on the horizon a global catastrophe races towards Gotham and with it comes a familiar face The Man of Steel though this time he has Batman in his sights. Witness as the aging Dark Knight wages a tireless war against crime while proving that courage and will are indeed timeless.

Warner Premiere has really delivered another fantastic Blu-ray combo pack like with “Part 1” also including a Blu-ray + DVD + Ultraviolet Digital Copy. The 1080p is crystal clear and works perfect with the animation.  The action is this amped up with the epic battle between our two superheros. The DTS-HD Master Audio 5.1 delivers the mood and action of this concluding chapter perfectly. Both the audio and video are in part with “Part 1” and equally successfully.

The special features are more impressive than “Part 1” release.  First up, we have “From Sketch to Screen: Exploring the Adaptation Process” is a behind-the-scenes documentary which looks into the extensive work that has went into converting this comic to a movie.  “Superman vs. Batman: When Heroes Collide” is a look into who would win this epic battle. “The Joker: Laughing in the Face of Death” is a look into the twisted villians role in this final chapter. “Additional Episodes: From the DC Comics Vault” is collection of classic episodes including “The Last Laugh” and “The Man Who Killed Batman” from Batman: The Animated Series and “Battle of the Superheroes!” from Batman: The Brave and the Bold. Lastly there is an extended preview of the next DCU animated movie, “Superman Unbound”.