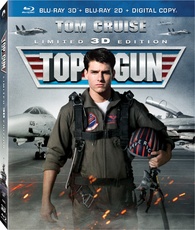 Who doesn’t love “Top Gun”? This film is easily one of the best things to have come out of the 1980’s and has Tom Cruise at his prime.  I think I must listen to Kenny Loggins’ “Danger Zone” at least once a week.  So what is new about this release of “Top Gun”, well most importantly it has been converted into the third dimension and boy is it impressive. Paramount did a really sharp job in restoring and releasing this film in 3D.  It is a very solid 3D presentation without any cheap gimmicks.  Of course when this film hits the skies is where the 3D really gets a chance to spread its wings. The aerial scenes are truly amazing and delivers the best added depth. The adding of the 3D just seems natural and like it was meant to be seen like this. If you are a fan, I mean who isn’t?, of this 80’s classic then this is a great way to enjoy the film again for the first time in its new format.

Paramount has delivered an impressive release within this two-disc Blu-ray.  Besides the 3D Blu-ray, it also including the previously released 2D disc as well and an Ultraviolet digital copy as well. This 1080p transfer is newly re-mastered and comes with the highest quality image that “Top Gun” has ever been attributed to. This release carries over the same audio options as the last Blu-ray release, which are still amazing! There are two tracks a DTS-HD MA 6.1 and Dolby TrueHD 5.1 track.  They are both impressive but the 6.1 track really shines the most.  Once the film takes off any Loggins’ “Danger Zone” starts playing, I got the chills and blasted the volume to 11! Let me tell you how amazing it sounded. Of course that is not the only great song in this film including the classics Berlin’s “Take My Breath Away” and very funny “Lost That Lovin’ Feeling”.  Besides just songs the aerial battles are great and have you ducking as they fly by your speakers.

The special features are taken from the previous releases but are still very impressive.  First off we have a solid audio commentary track including producer Jerry Bruckheimer, director Tony Scott, co-screenwriter Jack Epps, Jr. and naval experts.  This track contains information overload and really delivers. Must listen! “Danger Zone: The Making of ‘Top Gun” is a fantastic super in-depth 2.5 hour six-part documentary.  If you love “Top Gun” then this is the special feature for you. “Multi-Angle Storyboards” focuses on two sequences, “Flat Spin” and “Jester’s Dead”, from the film  with optional commentary by Tony Scott. This is cool but multi-angles extras feel a little too DVD for me. “Best of the Best: Inside the Real Top Gun” is another fantastic documentary is a look into the real-life history behind this film.

Next up have two decent featurettes, the first focusing on “Behind-the-Scenes”, which is clips mixed with interviews on the production. “Survival Training” looks into what the cast has to go through to get prepared for their roles. There is a nice interview with Tom Cruise chatting about the role and the film. Of course I go back to the great music in this film.  There are four music videos including Kenny Loggins’ Danger Zone, Berlin’s Oscar-winning “Take My Breath Away”, Loverboy’s “Heaven In Your Eyes” and of course, the Top Gun Anthem with Harold Faltermeyer and Steve Stevens.  Lastly there are also seven vintage television spots wrapping up these great extras.