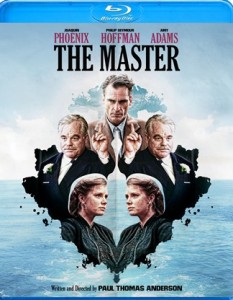 “The Master” is quite amazing…but is definitely not for everyone. This film deals with a lot of very deep underlying issues that don’t reveal themselves in one viewing. But that would mean you would really have to watch this film more than one. I do not think that I could do that. Is this film well-shot/well-acted etc? YES! But it is something that I would watch once and probably never speak of again. The film was shot for 70MM IMAX and I am sure that would have been an amazing way to see it but I did not have a chance. If you like Paul Thomas Anderson or looking for great performances, then I would recommend it but be warned it is not an easy dish to swallow.

Official Premise: A striking portrait of drifters and seekers in post-World War II America, Paul Thomas Anderson’s THE MASTER unfolds the journey of a naval veteran (Joaquin Phoenix) who arrives home from war unsettled and uncertain of his future–until he is tantalized by The Cause and its charismatic leader (Philip Seymour Hoffman).

Anchor Bay is releasing “The Master” as a Blu-ray Combo Pack including a Blu-ray + DVD + Digital Copy (not Ultraviolet though). The 1080p transfer is flawless as is DTS-HD Master Audio 5.1 audio track. The special features include: “Back Beyond” which features outtakes and additional scenes edited to music by Johnny Greenwood.  Next up is “Unguided Message”, which is an 8 minute short, as well as a behind-the-scenes featurette looking into the production.  I was very interested in the fact that John Huston’s landmark documentary about WW-II veterans was included, called “Let Their Be Light (1946)”. Lastly there is teasers/trailers included.

One Reply to “Blu-ray Review "The Master"”