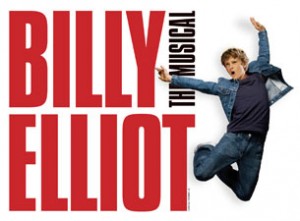 “I never had that much energy at that age,” is what I told myself after watching 12 year old Drew Minard steal the show as the title character in “Billy Elliot: The Musical.”

The show, based on the film of the same name, tells the story of a young man who, bored with boxing classes, finds himself drawn to ballet, an endeavor that does not go over well in his tough, English household, where it’s easier to make fun of “the bally,” as it’s called, then appreciate the beauty of the art.

As the show begins the audience is thrust into the beginning of Britain’s 1984 Coal Miner’s strike.  Billy’s father, Joe (Rich Hebert) is one of the leaders of the strike, hoping by holding out that he can better the life of his sons.  His oldest boy, Tony (Cullen Titmas) also works in the mines but doesn’t have his father’s temperament.  Joe and his sons live with Grandma (Patti Perkins), Billy’s mother having died some time ago.  They are working class, as is the majority of their small town, which makes Billy’s new found hobby even more difficult to embrace.  But, urged on by his teacher (Janet Dickinson), Billy follows her advice and, true to the song she sings to motivate him, he shines!

Winner of 10 Tony Awards including Best Musical, “Billy Elliot” is what I would call a “solid” musical.  It has all of the great elements you want in a show:  great cast, intriguing story and a good score.   Which is kind of disappointing since the music was written by Elton John (“The Lion King”) in a collaboration with Lee Hall, author of the book and lyrics as well as the screenplay to the original film.  While a couple of numbers stand out (“Solidarity” and “Merry Christmas Maggie Thatcher”) there really isn’t a song that you leave the theatre humming.  But don’t let that keep you away.  The show is entertaining and well choreographed.  Heck, the curtain call is a production number in itself.  And if you go, make sure you give a standing ovation to Master Minard (or any of the other boys, there are four in total, who are playing Billy on this tour).  He certainly earns it!

“Billy Elliot: The Musical” continues in Kansas City through January 27 and then visits the following cities: