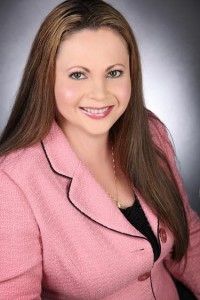 Born in Russia, Julia Davis seemed to have a fairy tale life. She met and fell in love with filmmaker B.J. Davis while he was making a film in her hometown, emigrated to the United States and, armed with her educational degrees, found a job in one of this country’s most important agencies – the Department of Homeland Security. However, the fairy tale took a horrific twist when Ms. Davis reported to her supervisors what appeared to be a security breach of top priority. Rather then investigate her report the agency, and others within the U.S. Government, set out to discredit her, as well as subjecting her family and friends to unimaginable harassment. It took almost a decade but the truth has finally come to light. With the DVD release of the whistle-blowing documentary film of which she is the subject, “Top Priority: The Terror Within,” Ms. Davis graciously took some time out to talk with Media Mikes about her life since the film was released and her plans for the future.

Mike Smith: What made you choose to go into a career with the government?
Julia Davis: Since my childhood, I always had an interest in police work and investigative matters. After 9/11, I felt the need to serve our great nation, helping to safeguard it from any future terror threats. Since I speak multiple languages, I thought that my abilities could be put to good use by the federal agencies responsible for protecting our national security.

MS: Do you believe that all of the retribution towards you was brought on because you simply embarrassed the government?
JD: I’ve often wondered whether the reason for such unprecedented magnitude of retaliation was embarrassment or corruption. Customs Service is historically the most corrupt federal agency. Even the former Port Director of the San Ysidro Port of Entry where I worked (which is the largest and busiest land border crossing in the U.S. and in the world), Daphiney Caganap was caught red-handed for accepting bribes to allow drugs and illegal aliens to cross the border. It is certainly not outside the realm of possibility that someone intentionally allowed 23 subjects from terrorist countries to enter the U.S. without following proper procedures, in exchange for a bribe or because of another sinister motive.

MS: How were you able to obtain the various taped testimonies and video surveillance footage that appears in the film?
JD: In retribution for my whistle-blowing disclosure, my husband and I were twice maliciously prosecuted and falsely imprisoned. We eventually prevailed against the Department of Homeland Security in those legal proceedings and were declared factually innocent. At that point we filed a lawsuit against the DHS to hold them accountable for their outrageous, unconstitutional actions. Discovery procedures provided an opportunity for us to depose the Defendants, videotaping their testimony. The 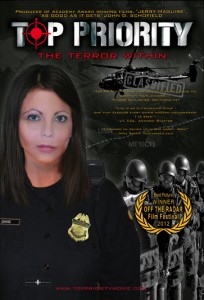 Blackhawk helicopter raid of our house was recorded by our neighbor, Mathew Judd. Shortly after giving us the tape and his statement, this healthy 25-year old man was found dead. Over the years we were subjected to extensive surveillance by fixed wing airplanes, helicopters, vehicles and agents following us on foot. We’ve been meticulously documenting what could be described as living in the movie “Enemy of the State”. The documentary contains 517 video, audio and document image inserts. Since the magnitude of the case is so unbelievable, we were determined to illustrate every fact with irrefutable evidence. Director Asif Akbar and Editor Paul Robinson labored tirelessly to make an enormous amount of evidence available to the viewing audiences. I can’t say enough to praise their dedication to getting the story told in a way that leaves nothing to speculation. What is shown in a film is not an allegation or contention, but facts, accompanied by audiovisual proof.

MS: Since the film was made have you been able to find anything that might further link this case with the deaths or Brittany Murphy or her husband?
JD: I’ve requested and obtained an extensive number of records from the Department of Homeland Security/ICE, which contained the evidence that Brittany Murphy and Simon Monjack were about to be prosecuted for alleged “immigration marriage fraud” shortly before Brittany died. As a matter of fact, Britt’s death is the only reason the prosecution didn’t go forward. I find it highly suspicious that the same agency (DHS/ICE) was utilizing exactly the same methods (helicopter and vehicular surveillance, entertainment industry work interference, investigations, etc.) to pursue my husband and I, just as they did to Britt and Simon after she became a witness in my case. Brittany and Simon exhibited numerous symptoms of acute poisoning prior to their deaths (including vomiting and abdominal pain), but neither their hair nor tissues were ever tested for toxins, poisons or heavy metals. Brittany’s father, Angelo “AJ” Bertolotti is continuing his fight to get his daughter’s hair and specimens finally tested by an independent laboratory. He is now represented by George Braunstein, Esq. – an esteemed attorney who was involved in securing a proper autopsy with respect to the death of Sylvester Stallone’s eldest son Sage. We are determined to find out Brittany’s and Simony’s true cause of death, which will start with proper medical testing of their specimens.

MS: You often appeared on television as an anti-terrorist expert before this happened. Are you still able to do this or has this case maybe scared off the networks?
JD: I still write for the Homeland Security Examiner and appear on network television as an anti-terrorism/immigration expert, but my case is undeniably too controversial for the mainstream media. Amongst other things, the documentary explores the connections between our government agencies and the MSM. It is disappointing, but no longer surprising.

MS: Were you able to take any action against the police departments that falsely stopped you?
JD: We’ve made a report to the San Diego Police Department that addressed the unlawful actions by the officers of their motorcycle traffic division (including Officer Steve Webb, who conspired with the Department of Homeland Security in conducting an illegal traffic stop). Much like the DHS, they took absolutely no action to hold anyone accountable.

MS: You have a Masters Degree in Aviation and Spacecraft Engineering. Any desires to pursue that field again?
JD: I studied engineering to follow in my parents’ footsteps, particularly because my father was an ingenious, award-winning inventor in that field. While I still love technology, I believe that creative expression in its various forms is my true calling. There are many important stories that need to be told and I intend to do my part in making that happen, as a Director, Producer, Screenwriter and an Investigative Reporter. 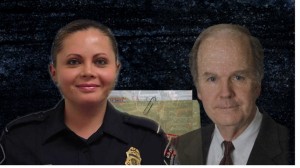 MS: What are your plans for the future?
JD: As they say, “People plan and God laughs”. My main goal and objective is to do my best to make this world a better place, one day at a time. I plan to continue making movies, writing books and news articles/investigative reports. I also plan to continue with my ongoing efforts to ensure that meaningful whistleblower laws finally get enacted, which would include jury trials and protection for national security whistleblowers.

MS: Finally, what would you say to someone who finds themselves in the position you were in and knows of what extremes others will go to prevent the truth from coming out?
JD: I would tell them to hold on tight, as they’re in for a wild ride. Most importantly, I would implore them to never surrender, never lose hope and never stop telling it like it is (even when it seems like no one is listening). Truth, justice and the American way is about doing the right thing, no matter the price.

One Reply to “Julia Davis talks about documentary "Top Priority: The Terror Within"”