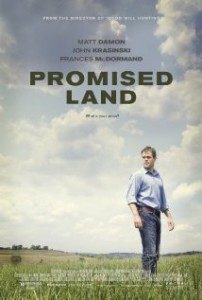 Small-town America isn’t what it used to be. With farms shutting down and the big stores coming in the thing most people end up with is the land under their feet. But what if someone told you they would like to pay you thousands of dollars for the chance to find natural gas? Would you be willing to let others foot the cost if something went wrong?

Co-written by stars Damon and Krasinski, “Promised Land” takes us to a small Pennsylvania town that has attracted the interest of the Global Corporation. How small? The sign on the local convenience store offers GUNS – GROCERIES – GUITARS – GAS. In that order. Two company representatives, Steve (Damon) and Sue (McDormand) are assigned the job of visiting the local land owners and negotiating deals to allow Global to “frack” their land – dig miles down into the shale and extract the plentiful natural gas. Opposing this operation is a local teacher (the still amazing at 87 Hal Holbrook, treading into Oscar territory again) and a new face in town, Dustin (Krasinski), an environmentalist who’s not all he claims to be. The opponents are given three weeks to sell their story before the town votes. In that time, stories will be told and secrets will be revealed.

Though a little heavy handed at times (Dustin, out to save the town, is given the last name “Noble”), Damon and Krasinski have crafted a very well thought out tale, one that comes across as “Local Hero” meets “Erin Brockovich.” As the company hot-shot Damon is solid, giving a small town sensibility to his character. Krasinski also does a fine job, but there is something about his character that makes you think he’s not as genuine as he seems. Rosemarie DeWitt does well as a local teacher both men are trying to “recruit.” The townsfolk are portrayed as genuine people…not rubes who jump at the sight of a shiny quarter. They are all put through their paces by director Van Sant, who continues to prove that, when he concentrates on characters, he is a fine storyteller. The onscreen story is aided by the almost subtle score of Danny Elfman.