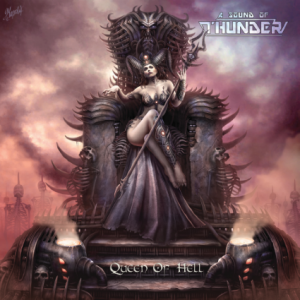 Last year A Sound of Thunder really delivered the goods with their breakout record “Out of the Darkness”. So I was already surprised to see new material so soon. Damn though, this is some sick shit!! This EP really comes jam-packed with 22 minutes of some really amazing music. Nina Osegueda really delivers some killer vocals and Josh Schwartz is fucking fierce on the guitar. This band is really taking over the metal world and I can’t wait see what they have planned for their forthcoming full-length album “Time’s Arrow”. This group never rests and maybe that is a good thing since I can’t seem to get enough of them…keep it coming guys!

Producer Kevin ‘131’ Gutierrez worked with the band again after deliver the gem of an album “Out of the Darkness”. The new material works as a great companion to the last album. This EP has this really strong classic power metal feel to it. The title track “Queen of Hell” is just a wild rollercoaster ride from the moment it starts. The vocals and guitar work just are hardcore and in-your-face. If you like the track there is also a duet version featuring guest vocals by Veronica Freeman (Benedictum). If you are a Black Sabbath fan, then your will enjoy their great rendition of “Trashed”. Schwartz has said a lot of their influences is from Sabbath, so it is nice to see them pay the song some great homage. “Hello Nurse” is the most different and risky song for them but it pays off, as it is totally rocking! If you are a metal fan, there is no way in hell that this album won’t get you rocking out! Get those devil horns because you are going to need them!

If you have yet to give A Sound of Thunder a listen this is a perfect time to start.  The band is going to be playing live dates throughout the US in early 2013 to promote this new EP, with further extensive touring planned for later in 2013 to promote “Time’s Arrow”. So I cannot recommend this album any more. I found myself just listening to it over and over on loop and it just works so well.  Sometimes when I listen to albums I find myself skipping songs, but this one literally has been looping for over an hour during the writing of this review alone.  This band has done some much in such a short amount of time.  Imagine what they are going to have completed in another five years! Get ready cause this group is full steam ahead and they are giving metal music a run for its money!