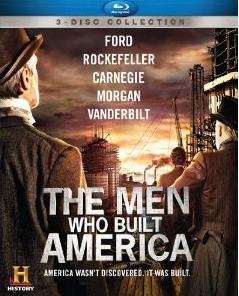 This mini-series original aired on History as an eight-hour, four-part miniseries. The series focuses on Cornelius Vanderbilt, John D. Rockefeller, Andrew Carnegie, J. P. Morgan and Henry Ford and how they…take a guess…built America. This series is arriving on a 3-disc Blu-ray from Lionsgate Home Entertainment. This series is nice blend of dramatic recreation with plenty of learning factor as well. History really delivers a very entertaining series here and even though it is eight hours, I literally almost had to watch this series in one sitting. It keep you completely enthralled and actually has great reply value. This is a must for History buffs.

Official Premise: The Men Who Built America™ tells the story of those that played a significant role in the shaping of this country. From Carnegie, Morgan, Rockefeller, Vanderbilt and Ford, the epic mini-series looks at how these individuals took a nation decaying from the Civil War into the greatest economic and technological superpower the world has ever seen. The Men Who Built America™ is the story of a nation at its crossroads and of the people who catapulted it to prosperity.

The first episode is called “A New War Begins” follows Cornelius Vanderbilt as takes over the railroad empire. It also shows the rise of John D. Rockefeller and as he founds Standard Oil. The second, “Bloody Battles”, focuses on Andrew Carnegie as his builds his steel empire and his struggles between Henry Frick. The third, “Changing the Game”, follows J.P. Morgan as his goes forward with the direct current electric light of Thomas Edison and faces competition from George Westinghouse and Nikola Tesla. The last episode is called “When One Ends, Another Begins” and it focuses around Rockefeller, Carnegie and Morgan as they team up to help elect William McKinley as US President. Of course due to assassination it falls to Theodore Roosevelt. Morgan buys out Carnegie Steel. Henry Ford founds the Model T and starts his own business, Ford Motor Company.

History is known for consistently delivering many impressive Blu-ray presentations. The 1080p transfer really looks sharp and really shows the amount of scale that this series brings forward. The DTS-HD Master Audio 5.1 also works really well. The special features are actually quite impressive for a mini-series. Normally a show like this would not come with any additional footage but this series does not skimp out. There are seven featurettes included on this release including “From Richer to Richer”, “The American Dream”, “Monopoly”, “Competitive Nature”, “The Every Man”, “The Rise of Cornelius Vanderbilt” and “Traits of a Titan”. If you are a fan of this series when it aired on History last Fall, I would highly recommend this Blu-ray just for the extras.