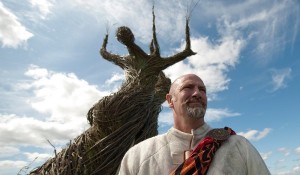 Alright so let’s place this film where it belongs. It is not a sequel to the 2006 remake of “The Wicker Man” with Nicholas Cage. This is a direct follow-up to the 1973 cult classic, though it is more of a re-imagining.  It is even directed by the same person, Robin Hardy, who did the original. When it comes to classic film like “The Wicker Man”, it is hard to try and improve on it. I did enjoy this film overall just was missing the spark that the original laid out. Also it claims to have a special appearance from original “Wicker” star Christopher Lee, but don’t blink or you will miss it.

This film follows two young missionaries (Brittania Nicol, Henry Garrett), who head to Scotland to spread the good word.  They end up in the small town of Tressock, where the locals seems to have their own secrets.  The couple agrees to become the local Queen of the May and Laddie for the annual town festival. Of course they have no idea of what they are getting into and their stay in Tressock might have just been made permanent.

The Blu-ray presentation does not disappoint though. The video looks sharp and clear into 1080p transfer. The audio is also spot-on and delivers an impressive Dolby TrueHD 5.1 track, which pops with the film’s music and effects. The special features are short and sweet overall. There is a brief behind-the-scenes featurette called “The Making of The Wicker Tree”. There are a few deleted scenes, nothing that would have saved the film. Lastly there is the theatrical trailer, though do not think this film has much of a theatrical release.