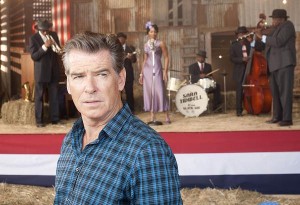 Whenever a new Stephen King TV film comes up, they have been hit or miss. This four-hour adaption is definitely a hit and comes back with a great cast. The film packs all its horror in the first hour or so and then it becomes more of a supernatural murder mystery. I still enjoyed the evolution of the film and didn’t feel that it dragged at all throughout its long running time. I have actually read the novel by King years ago and I enjoy them both equally.

The film stars Pierce Brosnans as Mike Noonan, a novelist who suffers from writer’s block after the death of his wife, Jo (Annabeth Gish). Mike gets drawn to the couple’s lakeside retreat

hoping to find answers but he is plagued by nightmares and ghostly visitations from Sara Tidwell (Anika Noni Rose). Sara is a blues singer who was murdered and her spirit is looking for help from Mike to solve her murder. While investigating these murders, Mike realizes that the small town has a few dark secrets of its own.

What I am most surprised about this release is that it wasn’t put out on Blu-ray. The film is available in HD but I do not know why they neglected to take advantage of the high-def release. The special features on the DVD are not impressive at all either. There are just two deleted scenes included with add nothing to the film.