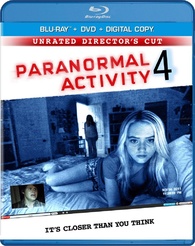 I am a big fan of the “Paranormal Activity” franchise. I was literally first in line with my sister and fellow fan for the fourth film. I have to say, I was a little bit disappointed. This film was fun and exciting but it didn’t pack the mystery and intrigue that the others had. This release includes both the unrated director’s cut and the theatrical cut of the film.  I watched the unrated cut and I really didn’t pick up on the difference. Also there are two new characters added according to the credits. Even though, the film does works a little better second time though, since I think my expectations were lower. Nonetheless, I still stand behind this franchise and look forward “Paranormal Activity 5” this October, as well as the spin-off “Paranormal Activity: The Oxnard Tapes” later this year. Bring it on Toby!

Official Synopsis: Fourth film in the found footage horror franchise which follows on from events in the first two films. Alice (Newton) and her mother were fine until their new neighbors moved in, but the creepy little kid next door, Robbie (Brady Allen) and his auntie Katie (Featherston) have brought more than just their belongings to the neighborhood. It seems that the demonic presence which has tormented them for years has followed them and is keen on getting to know the neighbors.

Paramount delivers a nice Blu-ray presentation in a combo back including a Blu-ray disc, DVD disc as well as an Utralviolet streaming digital copy.  I am a big fan of the UV digital copies and enjoy this being an added feature to this release.  When it comes to found footage, you have to give the quality of the transfer a big of room since it is shot on various formats.  But “PA4” really delivers a nice clean 1080p transfer with a sharp DTS-HD Master Audio 5.1 track. The special features on this release are not that great in terms of quantity.  “The Recovered Files” is the only extra included but it does include about 30 minutes more additional ‘found footage’ (check the link below).  There are a great deal of pre-release footage for “PA4” that did not end up in the final film. So we get a chance to see that footage here and some of it really backs some decent content. If you are a fan of the franchise though, I did enjoy footage and I recommend you checking it out.