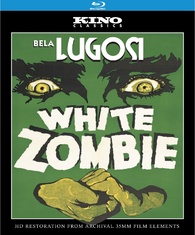 If you are a fan of zombies and shows like “The Walking Dead”, let me introduce you to “White Zombie”.  This is the film that started it all…the first zombie movie. This has influenced so many films over the last 80+ years. For the firs time, this film has been remastered in HD, thanks to Kino Classics! “White Zombie” has been released many times before on DVD and never looked like this at all.  Bela Lugosi, who is best known for playing Dracula, stars in this fan favorite with those mystical eyes of his. If you are a fan of this film, then this is the Blu-ray for you. Personally, this might not be Lugosi’s best film but it is certainly become a cult classic over the years and I recommend it highly on Blu-ray.

Official Premise: Along a desolate road in the Haitian mountains, a carriage bearing Neil Parker and Madeleine Short encounters a funeral in which the body is being buried in the road. Further down the road, the coach stops at the sight of a man of satanic appearance: six human shapes step forth, and the horrified driver shouts ”Zombies!”, signaling the first appearance of the living dead in American cinema. When first released, “White Zombie” occupies a deserved place beside “Dracula” and “Frankenstein” as one of the most eerie and interesting horror films of the 1930’s and remains a horror classic.

Kino’s Blu-ray of “White Zombie” comes with two complete versions of the film.  Both versions have been taken from an original 35mm negative with a few missing scenes taken from a 16mm print. Both are presented in it’s original aspect ratio: 1.37:1. This Blu-ray doesn’t really blow you away with its presentation of this film and for a film that is 80+ years old it shows its age quite a bit.  Same goes for the Linear PCM 2.0 audio track, it is decent but nothing special. The special features are a bit of a let down with quantity not quality.  There is a commentary track with film historian Frank Thompson, worth checking out for some good zombie references.  There is a nice interview with Bela Lugosi, which was filmed during White Zombie’s production. Lastly, there is a trailer from the 1951 re-release.