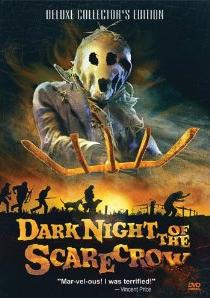 If you are a fan of horror, then you surely know about “Dark Night of the Scarecrow”.  The film has never had love from studios and was only just finally released on DVD for the first time in late 2010, thanks to VCI Entertainment.  It is hard to believe that this was a made-for-TV movie back in the day. Even for a TV movie, the film is still extremely disturbing and unsettling.  If it wasn’t for VCI, this film might still be missing and might have never seen the light of day. This Deluxe Collector’s Edition includes some great new special features and worth the purchase you don’t already own this.  There are certain horror films that have stood the test of time and this is certainly one of them.  Thanks to VCI, the film was given a wonderful restoration for the DVD release and really looks amazing.

Official Premise: When young Marylee Williams (Tonya Crowe) is found viciously mauled, all hell breaks loose in her small rural town. Officious postmaster Otis P. Hazelrigg (Charles Durning) leads a gang of bigots in pursuit of the suspect: her mentally challenged friend Bubba Ritter (Larry Drake). Finding him hiding inside a scarecrow, they exact brutal mob “justice”…only to discover a tragic mistake! Now a strange apparition stalks the land seeking each of them out, as the legend of the Scarecrow begins.

This DVD comes with two fantastic audio tracks, a Dolby Digital 2.0 Mono & 5.1 Surround track.  I prefer the 2.0 since it feels original but the later is very well-done.  Like I mentioned above, the transfer is very sharp and the colors look brand new and not from 1981 at all, especially within its original aspect ratio – 1.33:1. There special features are a nice improvement from the 2010 release.  There is a commentary track from director Frank De Felitta and writer J.D. Feigelson.  There are two trailers including the Original CBS World Premiere Trailer and CBS Rebroadcast Trailer.  There is also a great Behind the Scenes Photo Gallery included.  The new features include “Bubba Didn’t Do it: 30 Years of the Scarecrow” (2012 Extended Version) it is directed by Daniel Griffith and produced by Ballyhoo Motion Pictures.  It includes a new video interview with composer Glenn Paxton.   There is also the “DNOTS Cast Reunion Q & A” -that was recorded at the 2011 Frightfest Film Festival in Louisville, KY.