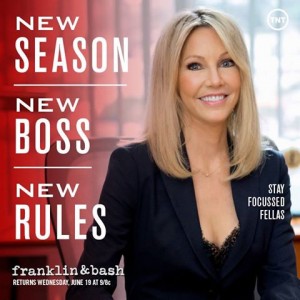 What do you do if you have a popular television show with popular stars as it approaches its new season? If you’re TNT you add everyone’s “go to” girl, Heather Locklear. From early 80s favorites like “T.J. Hooker” and “Dynasty” through the highly successful “Melrose Place” then on to “Spin City,” Locklear has always brought fans and, more importantly, ratings to her programs. Next week she joins the cast of “Franklin and Bash,” starring Mark Paul Gosselaar, Breckin Meyer and Malcolm McDowell as Rachel King, the law firm’s newest partner. The new season begins Wednesday, June 19 at 9:00 p.m. EST with an airing of back-to-back episodes. To celebrate her new gig Ms. Locklear sat down for some questions.

Media Mikes: When you first joined the cast, was it instant chemistry between you and Mark and Breckin or did it take a bit of time for you all to gel?
Heather Locklear: You know what, I think anyone would have instant chemistry with those two boys. So that was pretty much right away. We were joking and laughing right away.

MM: And what was it about the role that interested you in being a part of this show? It’s very 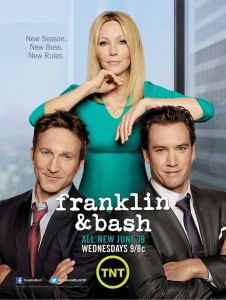 much a comedy mixed with a drama.
HL: Right. First because of that, that’s different. And also because I’ve never played a lawyer before. And when shows are on a couple seasons already, it’s always nice to go in on that when they are well-oiled machines.

MM: What do you like about the character?
HL: I like that she’s strong and she’s well educated…she knows world leaders and knows her stuff…her business.

MM: Do you see Rachel and Malcolm McDowell’s Stanton having a power struggle over the firm down the line? And what is Malcolm McDowell like to work with?
HL: You know, I do see that down the line. But with Malcolm, I mean yes I do see that a little bit because he hands over the reins to her to, you know, to get everyone in shape. And I step on toes a bit. But it’s so fun working with Malcolm. He’s so twinkly and sparkly and such fun. Have you met him?
MM: No, but we’ve interviewed him for our site in the past.

MM: Because of your popularity – especially on television series – you must get many offers. What was it about this show that made you say ”yes, this is the show that I want to do?” 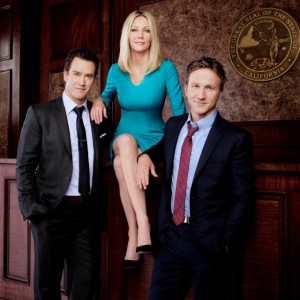 HL : Let me tell you something. I don’t get many offers. I get a few maybe. But because the show is like a “Boston Legal” – I loved “Boston Legal.” I loved “Ally McBeal” It’s similar to that. It’s a fun show. And it was different than what I’ve done in the past.

MM: If you had to name your three favorite roles what would they be?
HL: Like the shows?

MM: Yes.
HL: Oh, I loved “Melrose Place.” I loved “Spin City,”… both of them with Michael (J. Fox) and Charlie (Sheen). And I loved doing “Saturday Night Live.” That was fun.