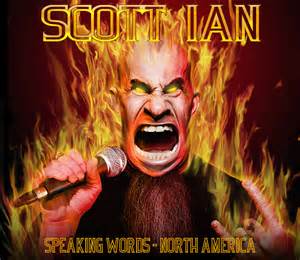 Anthrax/The Damned Things guitarist and co-founder Scott Ian brought his spoken word tour to the quaint Syracuse, NY venue known as the Lost Horizon on March 6th were he spoke about his 20 plus year career in the music business. Though this is Ian’s first run with this venture here in the States and his first appearance in Syracuse since 1987,he showed himself as the consummate professional and left no stone unturned.

Prior to the nights event whenever I heard the term “spoken word” I immediately thought of Henry Rollins and his outspoken and sometimes controversial speaking sessions where he shares with those in attendance his recent travel stories and thoughts on various subjects. However I now have a new name to throw in to the spoken word ring as Scott Ian proved he is more than just a heavy metal guitarist with an impressive goatee. For close to 3 hours Mr. Ian took the 100-150 people in attendance on journey dating back to Anthrax’s first trip to Europe which included a chance meeting with Lemmy Kilmister of Motorhead that resulted in a rather colorful explanation of what happens when a non-drinker hangs out with Lemmy for one evening. Accompanied by several cartoon like slides that added to the comedic side of Ian’s tales and a number of personal photos Scott progressed through his life and some of its darker days before closing out the night with tales of his late friend, Pantera/Damage Plan guitarist Dime bag Darrel.

After Ian finished up his portion of the evening he opened up the floor to questions from the audience. This proved quite entertaining as one fan in attendance proclaimed that he was there to request a DNA test from the Anthrax guitarist after being told by his mother that he was the result of a one night stand between his mom and Ian in 1983. Scott quickly put this person in place stating a number of facts proving that this was definitely not the case. Other questions tackled during the Q and A session included questions about the status of a new Anthrax album, the release of his upcoming book and DVD along with stories of Scott’s encounter with former area resident and heavy metal legend Ronnie James Dio.

It could have been very easy for Scott to get up on stage go through a pre-rehearsed routine and that would have been it however the evenings show was much more than that. Witty banter between Scott and the intimate crowd along with off the cuff stories and a lively question and answer session made the night unique and fun. You never knew where things would go next and it was something a bit different that a traditional stand up or spoken word performance. Another cool feature added to the night for those with a little extra drinking money was an after show meet and greet with Scott where he mingled with fans and continued to answer whatever questions people may have been too shy to answer during the open forum. The whole night was very relaxed and felt like you were hanging out with a bunch of friends telling war stories. My only hope is that Scott continues to do these types of shows and continues to evolve as a multi-tiered artist.