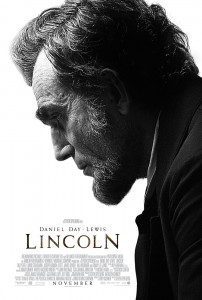 January 1865. Having just won re-election to a second term as president, Abraham Lincoln is greeting soldiers, black and white, at an encampment. The black soldiers ask Lincoln if there will ever be a black soldier made an officer. Another asks him how tall he is. The white soldiers claim to have seen Lincoln that fateful day in Gettysburg. But what all of the soldiers have in common is that they all have memorized Lincoln’s Gettysburg Address. Proudly they recite it, line after line, making it quite clear that they know exactly what they’re fighting for. But no one knows the battles going on behind the battle.

Told with the touch of a master painter, “Lincoln” is an epic canvas on which our 16th president comes alive before our eyes. Played with great skill (and an almost uncanny resemblance) by Daniel Day-Lewis, Abraham Lincoln is shown to be a man of great compassion. While he and his wife Mary (Sally Field) continue to mourn the death of their young son, Willie, the president struggles to bring an end to the Civil War while at the same time trying to get a constitutional amendment passed outlawing slavery. And while he earns assurances that the Republican members of the House of Representatives will support the amendment he will also need the help of several Democrats. To this end he is not above making deals and promising jobs to the Democrats who will soon be out of work as the Republicans won a majority of seats in the last election. He may not always be “Honest Abe” but his goals are admirable.

As one of this generations greatest actors, two time Oscar winner Day-Lewis is a shoo-in for a chance at a third trophy. He has given Lincoln a soft, high pitched voice, though one that has been called quite accurate by historians. Gentle of disposition most of the time, Lincoln only wants to bring his country back together…but on his terms. Field, another double Oscar winner, breathes life into Mary Lincoln, making her more interesting then the way history has painted her (grieving mother needing institutionalization). And Gordon-Levitt bounces back from the mistake that was “Looper” to portray oldest Lincoln child Robert, who feels guilty he’s at school and not in the army fighting to bring his father’s dream to life. Director Spielberg has also filled the cast with some of the greatest character actors around including David Strathairn, Hal Holbrook, John Hawkes, James Spader, Tim Blake Nelson and Tommy Lee Jones.

Spielberg has won Oscars in the past for directing historical dramas like “Schindler’s List” and “Saving Private Ryan.” Here he allows his camera to sit among the men of history and let the audience feel a part of the action. As usual, his long time musical collaborator John Williams sets the mood with another great score.