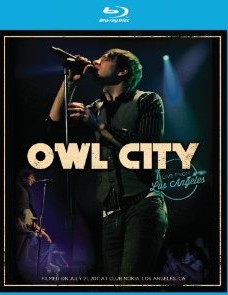 “Owl City: Live from Los Angeles” is like finding the golden ticket in a Willy Wonka bar. With a single plop of a disc and a click of a play button, we get transported to a land in which each sugary song gets devoured by all of the assembled ‘tweeny masses that have gathered in the City of Angels to see the Owlies. Adam Young, the 20-something geeky goliath behind Owl City, clearly loves holding the keys to the chocolate factory and is all smiles while delivering his candy-coated concoctions all of which have been baked using one musical recipe: take one batch of simplistic lyrics flavored with overly-enunciated nasally vocals, knead in a repetitive keyboard sample sequence and baste with standard electronica big beats. Initially, it’s a pretty tasty snack but, after a couple of helpings, you start wishing that you had opted for the Whitman’s sampler.

As easy as it is to immediately like Young’s genuine enthusiasm for what he’s doing and his “aww…shucks” emo-impishness when he’s bantering with his audience, the music that results doesn’t show any real tonal variety. It’s all sing-songy la-la-la type of stuff that would work well in a live-action Care Bears movie (trust me…one will happen). He’s also got a long way to go before his lyrics become compelling in any way. They’re always so cheery and peppy, it makes you wonder if the worst day in his life was when a toy failed to make its way into his McDonald’s Happy Meal. And it’s pretty easy to guess that when he introduces a song by saying “here’s one about angels”, the one he’s probably going to launch into is called…you guessed it…”Angels”.

For the one-trick pony that is Owl City, the number of musicians in the band is staggeringly large. In addition to Young, who serves as the group’s guitarist, keyboardist and lead vocalist, there are at least five other people onstage playing a wide array of instruments such as violin, cello and xylophone. At one point, there’s even a second drummer. Why such an arsenal is needed to produce music so banal is unclear as the whole show basically plays as one song in eternal-loop. The only exception to this is when Shawn Chrystopher video-screens in his guest rap during “Alligator Sky”. Even though Chrystopher’s not going to go down in hip-hop history as a flashy grandmaster, the addition of his vocal makes you fully aware of the monotony that you’ve had to endure up to that point.

“Live from Los Angeles” is the first live concert DVD/Blu-ray release from Owl City.  One could guess given their immense popularity that it’ll move truckloads when it is released.  However, it’s possible that very few members of their fan base will actually plunk down the dollars to buy it as many of the frequent audience shots show so many of the gathered Youngins capturing the Owls with their iPhones rather than actually watching the live show. For those that do make the purchase, though, the disc has enough sonic clarity to most likely satisfy any Owlhead audiophiles. And while the Blu-ray’s 1080i presentation does show some artifacting during full-stage shots when the backstage hands have pumped up the smoke machines, close-ups of the band are consistently sharp and clear. Bonus interview segments with Young can be sandwiched in between live tracks or played as one contiguous extended interview.

So, if you’re one who frequents the sparkly Pleasantville that is Owl City, “Live from Los Angeles” will probably be worth the trip. As for me, I prefer to drive through musical landscapes which occasionally have seedy urban boroughs that make me check to see if my doors are locked.