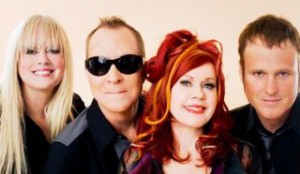 I doubt I’ll ever forget watching Saturday Night Live with my dad the evening of January 26th, 1980. He and I were huge fans of the show and tuned in weekly to check out the latest hysterical skits performed by Bill Murray, Gilda Radner, Jane Curtin and other classic-era cast members. But when host Teri Garr introduced musical guests the B-52’s, an interesting thing happened: my dad’s face became one that fully epitomized “WTF?” and mine expressed unbridled awe of the band’s whacked fashion and spasmodic party vibe. Yep…on that night, the generation gap was in full effect. The baton had been passed. Along with the tanning butter.

As the members of the B-52’s state in an interview that is included on their new DVD/Blu-ray “The B-52’s with the Wild Crowd! Live in Athens, GA”, that SNL gig was the career-changer that catapulted them from being a quirky band with something of a cult following to one that suddenly was moving truckloads of their self-titled debut album. The interview is a fascinating one that allows all four band members – Fred Schneider, Kate Pierson, Cindy Wilson and Keith Strickland – to tell the story of how the four musicians got together and eventually became one of the most well-known – and arguably the best – party band that rock and roll has ever seen. Throughout the half-hour bonus feature, we’re treated to so many pictures from the B-52’s scrapbook that “interview” is 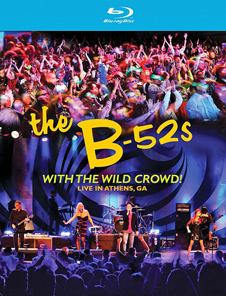 something of a misnomer: it’s an exceptionally well-produced and edited short-form documentary that leaves very few stones unturned, including the life and death of original guitarist and band cornerstone, Ricky Wilson.

The main event of the Blu-ray, though, is the 34th anniversary concert filmed in their hometown of Athens, GA. As the disc’s case states, they have managed to assemble a wild crowd that is all costumed up and ready to party out of bounds. When the 52’s hit the stage, they launch into the energetic “Pump” from their 2008 release “Funplex”. It gets the party started quickly and proves that, even after more than 30 years of dancing their mess around, they still can create music that’s just as fun as that on their first LP, which hit stores in 1979. By the time the 90-minute show concludes, they have delivered 20 of their most popular songs (“Roam”, “Rock Lobster” and – of course – “Love Shack”) as well as fan-fave classics (“Planet Claire”, “Mesopotamia”, “52 Girls” and even “Strobe Light”). The tunes are still jumpin’ and are delivered with all of the energy and vitality of the original album tracks. On a sonic level, the Blu-ray is immaculate regardless of which of the three audio options is selected by the viewer: DTS HD Master Audio, Dolby Digital 5.1 or LPCM Stereo.  The 1080i high-definition video is crisp and clean throughout.

Where “Wild Crowd!” falls short, though, is that said wildness is…well…pretty much exclusive to the crowd.   Even though the B-52’s  still seem to enjoy what they do, the performers themselves are fairly static and don’t move around the stage much.  Throughout the entire show, Fred is in the dead center flanked by Kate and Cindy.  And that’s about it.  There’s some banter between songs, but it’s so generic that most of it could conceivably be used at any stop of any tour. Given that the show this Blu-ray documents is a momentous anniversary show – and that this is a band whose outlandish costumes and eccentric showmanship used to rival those of Devo and other avant garde weirdies – it’s a shame that the disc’s visual content winds up being its most uninteresting component.  The crowd does their cosmic thing and shakes their honey buns non-stop. The band should oblige their enthusiasm but unfortunately becomes a bit of a deadbeat club.