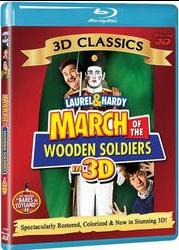 Laurel & Hardy are comedic legends…always will be.  “March of the Wooden Soldiers” is based on Victor Herbert’s 1903 operetta “Babes in Toyland”. This 1934 film has been spectacularly restored and presented in color…but there is still more this new release from Legends Films has been enhanced with a stunning stereoscopic 3D transfer.  The film is still a little bit creepy (as it has always been), but still fun to watch around the holidays. This is the first time that you have ever seen this film like this and let me tell you it looks good!

Official Premise: Imagine an enchanted fantasy world of timeless characters and magical moments where nothing goes right for the clumsy toymakers Stannie Dum and Ollie Dee. When a notorious scoundrel, Barnaby, demands to marry the beautiful Little Bo Peep, guess who secretly emerges as the blushing bride? Based on the original Babes in Toyland, this movie is a dazzling spectacle of 6-foot wooden soldiers, Mother Goose characters and the beloved team of Laurel and Hardy.

The original black and white tape was completely restored using the Legend Films proprietary restoration technology and then was colorized in High Definition resolution. So on this release we have the fully restored color and black and white versions.  There are no special features included on this release though unfortunately. I would have loved to see some classic shorts or other vintage goodies.  Nonetheless, Legend Films has scored again with another great restored and in this case 3D conversion. Can’t see what they have planned next.