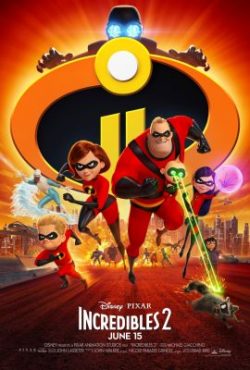 When I saw the first “Incredibles” movie, I really wasn’t blown away. I know there are some extreme people that saw that it is one of Pixar’s best but I never and still don’t see it even after 14 years. It’s obvious a sequel is here but even though “Incredibles 2” is a smart movie that not only has a message but improves from the first film…yet I was left unsatisfied luckily my expectation were low. I will say that “Incredibles 2” is definitely an action packed movie. I just wish it was more fun. I wanted to laugh more for sure. I just didn’t feel like the cast was having fun. “Incredibles 2” runs nearly two hours, which is a lot for kids to stick with. My little one left the theater yawning (as did I). Second act definitely picks up some steam but too late I felt.

Official Premise: “In “Incredibles 2,” Helen (voice of Holly Hunter) is called on to lead a campaign to bring Supers back, while Bob (voice of Craig T. Nelson) navigates the day-to-day heroics of “normal” life at home with Violet (voice of Sarah Vowell), Dash (voice of Huck Milner) and baby Jack-Jack—whose super powers are about to be discovered. Their mission is derailed, however, when a new villain emerges with a brilliant and dangerous plot that threatens everything. But the Parrs don’t shy away from a challenge, especially with Frozone (voice of Samuel L. Jackson) by their side. That’s what makes this family so Incredible.”

I just don’t see the fascination with these characters. I don’t like them, especially not in this movie. Mr. Incredible is a major egomaniac. I really didn’t like him in this movie, I know he is trying to be funny having “a men” taking care of his children while mommy is out working. I get it, the roles are reversed for the time that this film is timed in. It doesn’t make it any better that he is jealous of his wife’s success and honestly gives me a real bad taste throughout most of his scenes. I am glad that Elastic Girl gets a chance to shine this movie, even if it has a social commentary within it and it ended up being my favorite part of the film. I felt like it added an extra level to the typical superhero male driven story.

Frozone was used a little more this time but at the same time even less it felt like. I didn’t enjoy looking at (the Acid reflux guy was disgusting) or listening to any of the new characters that were introduced outside of Winston Deavor (voiced by Bob Odenkirk) and his sister Evelyn Deavor (Catherine Keener). These two nailed their roles for sure. I liked them but the other “supers” weren’t super at all. Jack-Jack definitely steals the show, no question. He is funny and super cute. Loved his powers for sure. There is a great bit with Edna and Jack-Jack that was a riot. So in closing, I am not a huge fan of “The Incredibles”, I enjoyed the sequel but it is not a favorite of mine. It is probably not something I can watch over and over again like we have with “Inside Out” or “Wreck-it Ralph”. But if you are a huge fan of the first movie, this will definitely leave you satisfied and wanting more.