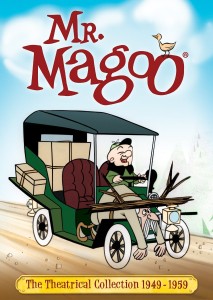 Oh Shout! Factory, you’ve done it again! “The Mr. Magoo Theatrical Collection (1949-1959)” is a brand new special edition edition 4-DVD set available for the first time. Included on the DVD are all 53 theatrical cartoons, including 12 cartoons in anamorphic widescreen for the first time. If that isn’t enough, there is also the feature film “1001 Arabian Nights”. These have shorts never looked better and in fact they actually have been newly remastered and delivered in their original theatrical aspect ratios. A must own for again Magoo fan!

Mr. Magoo has delivered laughs to the world for more than six decades. Voiced by the multitalented comedic actor Jim Backus (“Gilligan Island”) who gave life to the character of Quincy Magoo or better known simply as good ole Mr. Magoo. The character has starred in two Academy Award winning theatrical shorts, three television series and two television specials. Watching these for the first time in many years was a real treat and I also enjoyed sharing these with my 2 year old daughter, who dug these as well. I think it is a about time that Mr. Magoo makes a come back and this is a great way to get this started.

To be honest with you, I was happy with the 53 theatrical cartoons and the feature film “1001 Arabian Nights”. These are a great collection item for fans but there is still more included in this release There are some pretty great extras included as well. There is the vintage documentary “A Princess For Magoo: The Making Of 1001 Arabian Nights”, whihc looks into the film. There is an interview with film critic and historian Leonard Maltin taking about the near-sighted character. There is a documentary on UPA & Mr. Magoo. Lastly and best yet are 14 commentaries tracks on these cartoons, which is worth the purchase alone.