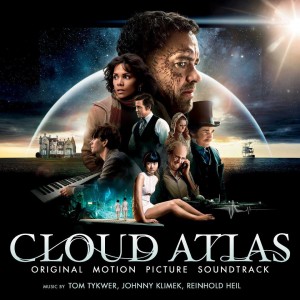 I have been following this film since day 1 of its production. I had a buddy of mine that worked on the film, so I have been looking forward to this film very much. I am not surprised to say that this score is easily one of my favorite of the year. I am surprised though with the type of music that was used for this film but…wow does it work so well or what?! “Cloud Atlas” is a long film running just shy of three hours and this album is a nice companion, especially running at a nice 78 minutes.  The album starts off strong and ends even stronger, which is very rare.  This is a must listen!

I was a little nervous originally since there are a lot of hands in the pot with this score being composed by not one but three people including, Tom Tykwer, Johnny Klimek, Reinhold Heil. Tom Tykwer is also one of the directors of this film and has composed most if not all of his films.  He knows music and really puts a unique touch on this score. This isn’t the first go around though for these composers together they have worked together on numerous films including “Run Lola Run”. So you know that they know how to make a killer score.  “Run Lola Run” was one of my favorite scores in the late 90’s. This is completely different score but really delivers a wonderful experience.

This whole album really works as a whole but some of my favorite tracks are the following: 1. Prelude: The Atlas March, 2. Cloud Atlas Opening Title, 21. Cloud Atlas Finale, 23. Cloud Atlas End Title. I can listen to this tracks on loops for hours and hours and never get tired of them.  I can guarantee you that this album will not be leaving my iPhone for a long time, especially those tracks.  I listen to many, many scores each year and this one is definitely such a pleasure and wonderful blend from this trio of composers.  If nothing else, this makes me want to run out and see this film ASAP!