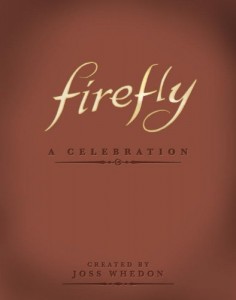 Is it possible to give six stars? Because this book is one of the finest I have received in a long time. “Firefly” is really such a phenomenon. The series was canceled before it even finished airing its first season, which is now over 10 years ago, yet this show is still more popular then ever. “Firefly: A Celebration”, the anniversary edition, was released last year to celebrate 10 years. I spent the better part of 5 months trying to get my hand on this book, but it was well worth the time and effort. If you are a fan of Joss Whedon or his work, then this book should be on your must-have list!

“Firefly: A Celebration” includes Titan Books’s three bestselling Firefly titles together in one place including “Firefly: The Official Companion- Volume 1 & 2” and “Firefly: Still Flying- A Celebration of Joss Whedon’s Acclaimed TV Series”. These books were only previously released in softcover, so this is a real treat but there are a few extras treats. This gigantic collection of Joss Whedon’s work now spans over 500 full color pages. Let me tell you full color doesn’t even give it justice. The pages are extremely hard stock and the images are beyond pristine. The presentation of the book is yet another marvel. It comes in a foil-stamped leather-effect binding, which is just so classy and earns it spot right on the top of my coffee table.

There are several in-depth interviews with Joss Whedon and the cast and crew. There are full and uncut shooting scripts from every episode in the series. There are also new stories from the writers of the original TV episodes, which is a must-read for any fans. Like I mentioned of course the images in the book are to die for. There are tons of rare photos including production art and behind-the-scenes. There is also a character profile for each main cast member from the show and also showcases on their props and costumes.

If all that above is not enough to make you run out to buy this book. There is also an exclusive bonus for this edition, including a pocket at the back of the book which contains 9 frameable photo prints of the cast. These are rare and previously unseen images, which makes is a main draw for this book as well. Lastly, there is a facsimile of one of the prop banknotes used in the show. I mean honestly, what more can you ask for? I was literally jumping around like a little kid with this book, but not for a long time since the sucker weighs like 5 lbs. Easily one of the most impressive books ever produced for a TV show. I commend Titan Books on another amazing release and thanks for helping keep “Firefly” alive for its fans.