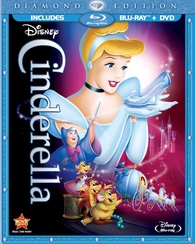 “Cinderella” is the next in line to receive Blu-ray treatment for the time from Disney. This fairy tale princess is one of the most recognizable and even has her own real-life castle located her in Orlando FL ­¤śē “Cinderella” looks glorious on Blu-ray with this simply magical restoration and video transfer. There are also two spectacular audio track include. The first is a remix track of DTS-HD Master Audio 7.1 and of course there is also the original audio, DTS-HD Master Audio Mono. This is a must for all Disney fans but if you are then you probably aren’t reading this. The ultimate fan would definitely want to check out the Limited Edition Collectible Jewelry Box of this release, which includes all three “Cinderella Films”: “Cinderella, “Cinderella II: Dreams Comes True” and “Cinderella III: A Twist in Time”. Keep ’em coming Disney, still have plenty more classics to upgrade to Blu-ray.

The special features are just as magical as the film itself. ┬ĀThere is a brief introduction to the film from Diane Disney Miller. I will start on the HD special features first. ┬Ā“Cinderella Alternate Opening Sequence” is a short but still┬Āworthwhile extra, which is showcased in the film’s original storyboards. “Backstage Disney: Diamond Edition” include three newly produced featurettes together running about 30 minutes. The first is my favorite on the release called “The Real Fairy Godmother”, really an amazing piece of work (got me teary). The next is called “Behind the Magic: A New Disney Princess Fantasyland””, which takes a look into Walt Disney World’s renovation and expansion of Fantasyland. Lastly, “The Magic of a Glass Slipper: A Cinderella Story” is a French short film about famed shoe designer Christian Louboutin. ┬ĀTo top off the HD extras is the equally amazing and retro “Cinderella” companion, “Tangled Ever After” short film. ┬ĀThis was originally released in 3D with “Beauty and the Beast” in theaters.

The rest of the special features, which are still great are taken from the 2005 Special Edition DVD, and are in standard definition. “From Rags to Riches: The Making of Cinderella” is an extensive documentary and still amazing. “The Cinderella that Almost Was” shows other concept designs for our princess. ┬Ā“From Walt’s Table: A Tribute to the Nine Old Men” is a nice tribute to the legendary Disney animators from the old days. “The Art of Mary Blair” focuses on the female artist, who was very important to the film. ┬Ā“Storyboard-to-Film Comparison” focuses on movie’s opening sequence. ┬ĀThere is an animated “Laugh-O-Gram” of the Cinderella story from 1922. ┬ĀThere is also a 1956 excerpt from “The Mickey Mouse Club”. ┬ĀThere are three deleted scenes displayed with original art and storyboards and┬Āsix theatrical and reissue trailers.

The last feature consists of audio only content. ┬ĀThere are archive audio recordings of the “Cinderella Title Song,” seven “Unused Songs,” a 1948 “Village Store” excerpt, a 1950 “Gulf Oil Presents” excerpt, and a 1950 new program called “Scouting the Stars”. ┬ĀIf you are have┬Āa compatible mobile device or table you can enjoy the “Personalized Digital Storybook: Bibbidi-Bobbidi-You”, which is an interactive Disney Second Screen storybook. Also like other classic animation films on Blu-ray, you can fill the black bars on sides of your TV with artwork by Disney background painter Cristy Maltese using┬Ā“DisneyView”. This Diamond Edition release does not disappoint in any scene┬Āwhatsoever. I should also mention that this Blu-ray release also comes with a DVD of the film and a discount for a online streaming copy, so you can watch this film wherever you go.

Premise: Everyone orders Cinderella around: her cruel stepmother, her awful stepsisters — even the big clock in the church tower tells her when to start another day of drudgery. But they can’t stop her from dreaming, and Cinderella has faith that someday her wishes will come true. When an invitation to the royal ball arrives, Cinderella is sure her time has come — until her stepsisters, with the encouragement of Lady Tremaine, tear her gown to shreds. Just when Cinderella believes all is lost, her Fairy Godmother appears, and with a wave of her wand and ŌĆ£Bibbidi-Bobbidi-Boo,ŌĆØ transforms an ordinary pumpkin into a magnificent coach and CinderellaŌĆÖs rags into a gorgeous gown, then sends her off to the Royal Ball. But CinderellaŌĆÖs enchanted evening must end when the spell is broken at midnight. It will take the help of her daring animal mice friends and a perfect fit into a glass slipper to create the ultimate fairy tale ending.