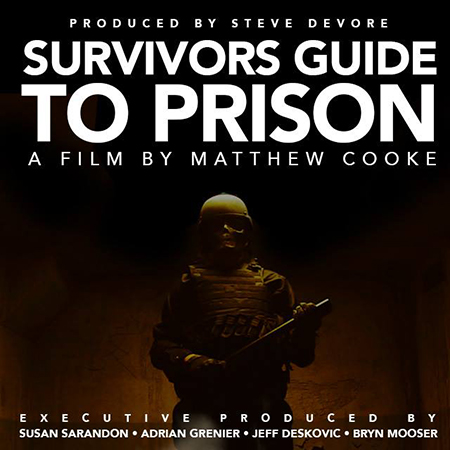 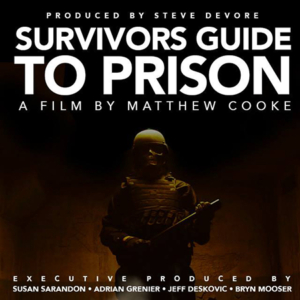 When I sat down to write this review, I tried to think of a film that, upon its release, found itself on the front page because of the subject matter it covered.  All I could come up with was “The China Syndrome,” which was released in March 1979.  12 days after it opened, events unfolded at Three Mile Island which nearly mirrored the film.  Recently here in Kansas, a man named Lamonte McIntyre was released from prison after serving 19 years for a crime he didn’t commit.  That theme is repeated in filmmaker Matthew Cooke’s latest project, “Survivor’s Guide to Prison.”

The film introduces us to two very different people with one thing in common:  innocence.  Bruce Lisker was a white 17-year old boy when he came home one afternoon to find his mother dying from multiple stab wounds.  He called 911 but when the police arrived they took him into custody “for his protection.”  He would not see freedom again for 26 years.  Reggie Cole was a young black man who was also arrested for murder.  He was lucky.  He only had to fight for 16 years for his freedom.  Both men were the victims of shoddy police work, ineffectual representation and this country’s eagerness to throw people in prison.  And it’s not getting any better.

Narrated by a host of celebrities, among them Trejo, Quincy Jones, Danny Glover, Sarandon, Ice T and director Cooke himself, the film is a step-by-step, by the numbers guide on how to do whatever it takes to keep yourself out of prison.  As they tick through the bullet points – “Be Polite” is first and foremost – it’s almost humorous to see people like Trejo, his face weathered from having spent over a decade himself in prison, offer reminders on how to stay clean.  But the more they speak, the more you realize you’d better pay attention.  It is revealed that with all of the new and various laws being passed constantly, the average American can commit three felonies a day without knowing it.

As we learn more and more about life behind bars, the film also revisits Lisker and Cole, and they’re own struggles.  The true definition of irony comes when, five years into his sentence, Cole kills a man in self-defense.  Because of the circumstances that put him behind bars for murder, an innocent man is NOW a murderer.  Hidden camera and surveillance footage show the brutal way of life that is a constant for those incarcerated.

A sobering look at a life any of us, if enough things work against us, could find ourselves living, “Survivor’s Guide to Prison” is a film that should not be missed.