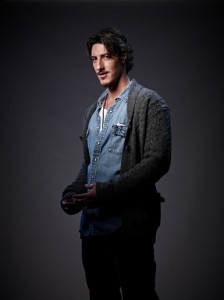 Eric Balfour plays the role of Duke in Syfy’s “Haven”. The show begins its amped up season three on September 21st. Media Mikes had a chance to chat with Eric about what wee can expect from this season and his character.

Mike Gencarelli: Tell us about your relationship this season with Nathan?
Eric Balfour: I like to think of Nathan and my character’s relationship as sort of like when Harry met Sally. We’re sort of in the second act of “When Harry Met Sally” when I think they’ve probably slept together at this point but it was a little awkward and they’re going to have to now realize how much they actually mean to each other. No, I think the show obviously has this really exciting element of the troubles and every week you have these, you know, fantastic scares and mysteries. But, at the core of this show, it really is about this love story and this triangle between these three characters and about the different relationships that Emily’s character, Audrey, has to these two men. And they sort of represent different components of her own personality, if it’s okay for me to say that.

MG: What can we expect from season three?
EB: I think what the writers even told us at the beginning of the season and what was most exciting for me and I think is going to be incredibly exciting for the viewers who turn in this – tune in this year is that this love triangle is really going to just be like a rubber band. It is going to expand and contract and move and grow and cause riffs and strifes and it really is dynamic this season. I think that’s what’s going to be ultimately I just think the most exciting part for the fans of this show because we really do get to take the audience on a ride this year with the love story that goes on between these characters. As friends, as lovers and it’s my favorite part of the show this season.

MG: Can you reflect on the world that has been created for this show?
EB: My favorite part is that episode that really take you out of your everyday life. I think what we’ve created here in Haven is this sort of strange macabre, quirky world and it exists in its own reality in a way. Those are my favorite episodes when we really dive into that world and that reality where Haven is a town that although it’s not completely different from the world we know, it is unequivocally not the world that we know. And that’s my favorite part when we live in that reality.

MG: Any memorable moments from shooting?
EB: My most memorable moment was there is an episode where a woman is trapped in a car that is sinking under water and it was a huge stunt. And it was the first time where our

show felt really big and we have the car over this cliff, in the ocean waves crashing on it, paramedics and stunt guys and cranes. And that to me was probably the most memorable moment was this. I felt like we were making a movie. It was really cool.

MG: Tell us about “Haven” working side-by-side with social media?
EB: I think the coolest thing about what we’re trying to do with Twitter, the online interactions and storylines is really to enhance the experience of the show for everybody. It’s not necessarily something that nobody else is doing at this point. But we’re really trying to do it in the unique way that makes it exciting for the viewers and makes it exciting for the fans to feel like they get a little bit extra and a little bit more than just from watching the episodes on television. And then hopefully, also enhance the experience of watching the episodes.