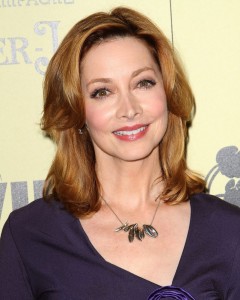 Nominated for four Emmy awards, Sharon Lawrence is probably best known for her six seasons on “NYPD Blue.” Since leaving the show she has kept busy with roles in both film and television, including the upcoming new season of “Drop Dead Diva.” This week Ms. Lawrence begins a run as Dr. Hope Martin on “Rizzoli and Isles.” Recently Ms. Lawrence graciously took time out to talk with Media Mikes about her new role as well as her strong support for the Women in Film movement.

MIKE SMITH: Can you tell us about your character on “Rizzoli and Isles?”
SHARON LAWRENCE: I play Dr. Hope Martin, Maura Isles (Sasha Alexander) birth mother, who she believed was long lost and had given her up from birth. But by the time my character arrives at the medical examiner’s office after being called in to consult on a case, the audience is aware that the mother didn’t give her up at birth but had thought the baby had died. This character is also a scientist and she shares the same passion for a particular type of forensics. Maura is the first to know that this woman working alongside her in the lab is the mother she has always wondered about and longed for. But Hope is not aware. So it’s a very interesting dynamic to play. And it’s played so masterfully by Sasha Alexander, who had to play such a complex balance of awareness and longing and joy and pain. And to unlocking the secret that Hope is the key to understanding who she is.

MS: How did you get involved with the show? Did they come to you because they felt you were the right actress for the part? Were you a fan of the show before hand?
SL: Yes to both! (laughs)

MS: I have a question that I also asked Angie Harmon, who of course appeared on “Law and Order.” After having appeared for six seasons on one of the greatest television shows ever, “NYPD Blue,” does that effect your choices as an actress when you’re asked to do television?
SL: Well I certainly agree with you that it was one of the greatest television shows ever made and it certainly stands the test of time. I just saw an episode recently. But I’m a different person now. I could never base my choices and things that are decades in the past. I play different things now. I have different wisdoms. I have different experiences. I have a different role to fill in any story. And I’m so gratified that now I get to play mothers to these remarkable women. Whether it’s to Sasha on “Rizzoli and Isles” or on “Drop Dead Diva,” a delightful show that has a magic realism about it. I’m really fortunate that my career is not held in the past or held to one particular type of character or stage in a woman’s life. And what’s also very exciting is that I’ve been working with Women in Film for the past ten years. It’s a group that’s not just for networking but for promoting women in the executive and creative capacity of our business. And now I see so many women that are creating the material and telling the stories from their perspective. Whether it’s as show runners or writers or as directors, it’s nice to see that these women are building careers and not just one-offs. Knowing that there are female executives at networks like TNT and Lifetime that understand the complexity that we expect to see in our stories and that really resonate with us. So yes, “NYPD Blue” was glorious and these stories that we’re telling now are very exciting too.

MS: Since you mentioned Women in Film, do you have any interest in going behind the camera? I know you’ve produced in the past but do you want to take on more, perhaps as a director?
SL: I’m developing a movie about the breast cancer survivors who, just recently, after 20 years together as the first Dragon Boat racing team, was invited to be part of the Queen’s flotilla for the Jubilee. It’s an exciting process to get to interview those women and doctors and to prove that women not only can survive a diagnosis and treatment of breast cancer but grow stronger.

MS: Besides “Rizzoli and Isles,” what else do you have coming up?
SL: “Drop Dead Diva” begins in August and I’m also in a feature film called “The Middle of Nowhere,” which just won the Best Director Award at Sundance, which was a first for an African-American director. I’m also in a feature with Kathleen Turner called “The Perfect Family.” It’s currently out on DVD. And again, it’s all female writers, director and producers. I’m happy to help support them.