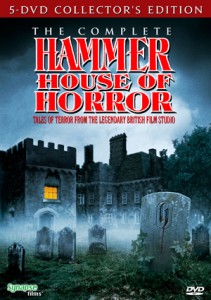 If you are wondering who to so thank you for this great release, all the praise needs to go to Synapse Films. They are the ones behind this complete series of “Hammer House of Horror”, which is presented in their original airdate order, with all-new introductions. Even those this show is from the 1980, the episodes are still creepy and feel rather timeless. The episodes presentation…well that’s another story, which I’ll cover more below. I just wish that this series ran longer than 13 episodes. Nonetheless hardcore fans will be doing back flips for this release.

There is plenty of Hammer regulars, including Peter Cushing (Twins of Evil, Star Wars) and Denholm Elliot (Raiders of the Lost Ark), Patricia Quinn (The Rocky Horror Picture Show) and even Pierce Brosnan (GoldenEye) shows up. Like other anthology shows like “The Twilight Zone”, each episode of this series takes us on a completely new tale of horror and suspense. Being a die-hard fan of Hammer, this release is truly the shit. It carries the Hammer name with pride and makes sure to include plenty of gore, boobs, and plain ole gothic macabre, which is what made Hammer so great.

The episodes are presented it full frame with an aspect ratio of 1.33:1. This is exactly how the show was originally filmed and broadcasted. Don’t worry though these episodes look damn good. There is some fuzzy spots and print flaws pretty but overall nothing that affects the viewing experience. All of the episodes are pumped with Dolby Digital mono tracks, which of course is true to the original airings over 30 years ago. The special features are decent but not amazing. Like i said above their are episode introductions from Film Historian Shane M. Dallmann. There are two featurettes included as well. The first is called “Grave Recollections: A Visit with Kathryn Leign Scott and the second is called “Hammer Housekeeping: A Visit with Mia Nadasi. Both are short but sweet. Lastly there is a decent “Animated Still Gallery”, which Hammer always deliver on stills.

EPISODE LISTING:
Witching Time
The Thirteenth Reunion
Rude Awakening
Growing Pains
The House That Bled to Death
Charlie Boy
The Silent Scream
Children of the Full Moon
Carpathian Eagle
Guardian of the Abyss
Visitor from the Grave
The Two Faces of Evil
The Mark of Satan