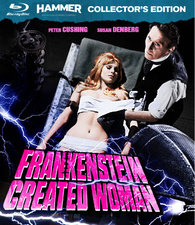 Personally, when I think about Peter Cushing, I think about him as Baron Frankenstein. He became well-known for playing that role through six films spanning from late 1950’s through the 1970’s under Hammer Studios. “Frankenstein Created Woman” is the fourth film in Hammer’s Frankenstein series. The film is such a classic and thanks to Millennium Films, the film is getting Blu-ray treatment for the first time ever. They have big proprietor of Hammer Films and I hope that this trend continues because it great to see classics like this get the spotlight again. A must have for any true horror fan!

Official Premise: A tormented girl (Susan Denberg) drowns herself after her lover is framed for her father s murder and guillotined. Baron Frankenstein (Peter Cushing), experimenting with the transfer of souls, places her lover s soul into her body, bringing Christina back to life. With no memories of her past life, she becomes driven by a ghostly revenge and carries out a violent retribution on those responsible for both deaths.

It is crazy to this that this film is nearly 50 years old…but it is true. Millennium delivered a solid 1080p transfer. It is clean and really sharp looking. I thought it really packed a visual punch. The same goes for the DTS-HD Master Audio 5.1 track, which really captures the essence of what a Hammer film should sound like.  This Collector’s Edition Blu-ray also includes limited edition exclusive collectible cards. They are basically smaller reproduced lobby cards for the film and a must have for any collector.

In terms of special features, this release scores again. There is a fantastic audio commentary track with Derek Fowlds (“Johann”), Robert Morris (“Hans”) and Jonathan Rigby (Hammer Historian). There is also a brand new documentary called “Hammer Glamour”. This is a must watch for any Hammer fan. There are also two “World of Hammer” episodes included. The first is “The Curse of Frankenstein” and “Hammer Stars: Peter Cushing”. Great extras. Lastly, there is an Animated Stills Gallery and trailer included.