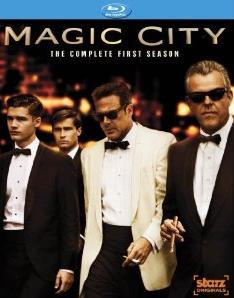 “Magic City” is a fresh new series thanks to STARZ. It was created by writer and executive producer Mitch Glazer (“The Recruit”, “Scrooged”). Fans of the series can rejoice since the second season of “Magic City” is set to air on STARZ in 2013. Anchor Bay Entertainment is behind this great release, which includes all 8 memorable episodes of this sizzling mob drama. “Magic City” also packs an impressive cast with Jeffrey Dean Morgan (“Watchmen”), Danny Huston (“30 Days of Night”) and Kelly Lynch (“The L Word”). The show has a really impressive sets, some amazing cinematography and one hell of a score. I can’t wait to see where this show goes with its second season.

Dangerous and decadent, “Magic City” begins in 1959, in Miami’s Miramar Playa Hotel where hotelier Ike Evans (Jeffrey Dean Morgan, Watchmen, Texas Killing Fields) is conjuring up ways to finance his dream. He has essentially sold his soul to the devil: mob boss Ben “The Butcher” Diamond (Danny Huston, The Kingdom). Ike’s wife Vera (Olga Kurylenko, Quantum of Solace), a former showgirl, and his three children think he is an honorable man, but he just can’t break his pact with the most notorious criminal in town. So Ike’s life is a façade: his home and his business must be kept separate – but does he have the sleight of hand to pull it off?

The Blu-ray presentation both look and sound amazing for this show and really shines. The special features are very impressive for this season release. The features include various behind-the-scenes featurettes. The first is a basic all around production featurette “Starz Studios: MAGIC CITY”. Next up “The Cars of MAGIC CITY”, explores the period cars used for the show. “The Style of MAGIC CITY” looks into the shows fashion. “Building An Empire” looks into the show’s set design. “The Golden Age of Music” dives into the shows period’s music. Lastly, in “Miami Beach: The Real MAGIC CITY” takes a look at the real city and the filming locations.