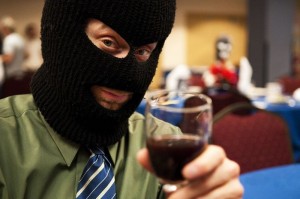 Jon Glaser, creator/writer/star of “Delocated” has created one hell of funny gem with this show.  The show focuses around a family that is in the Witness Protection Program that gets their own reality show.  It is not just that though…they have to wear ski masks and voice changes patches to hide their identity .   It only gets funny from there as they are being tracked down by the Russian mob, who also end of getting a reality show.  The show is packed with great co-stars and delivers many laughs in each episode.  With season three right around the corner, this is a great chance to catch up on seasons 1 and 2 of the series.

In season 1, each episode clocked in at 11 minutes each but in season two it was upgraded to 22 minutes.  I feel that the show definitely was improved during season two with the extended length.  Episodes from Season 1: Pilot, “Bar Mitzvah”, “Good Buds”, “Rage Cage”, “The Soother”, “Member’s Only”, and “Sick Of It”; Season 2: “Decoys”, “Conversion”, “Dog Mayor”, “Mixer”, “Jon He Does It”, “Mole”, “Kim’s Krafts”, “‘Fidence”, “Tap”, “RV B&B”, “David’s Girlfriend” and “Coma”. Season two definitely has the best co-stars like Mather Zickel as Jon’s bodyguard Federal Agent, Eugene Mirman as the Russian hit man Yvgeny Mirminsky and Jerry Minor playing the show’s executive producer Mighty Joe Jon: The Black Blond. Yes, BTW that is what he is called the whole season. Just don’t grow too attached to each character since they are not afraid of killing anyone off and replace them instantly. Which only adds to the laughs!

The special features include two commentary tracks from Glaser on the first disc.  The second disc includes about ten minutes of deleted scenes and about 25 minutes of outtakes.  I am a big fan of outtakes and this one definitely takes the cake.  It sure does look like filming was a ton of fun.  There are two flip books included with include some great behind the scenes and  production stills.  There is also Glaser’s demo that he used to pitch the show to the studio.  It was cool to get to check that out especially since the show’s format was slightly different. Overall if you enjoyed the show, you should race over to the special features for more of the same greatness from the show.