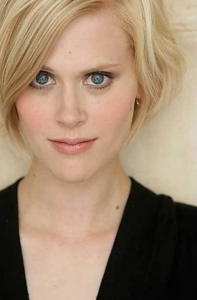 Janet Varney is known best for voicing Korra on Nickelodeon’s “The Legend of Korra”.  She also appeared in the first season of Syfy’s “Insane or Inspired?”.  Currently she is working on HuffPost Live, a live streaming network. Janet took some time to chat about voicing Korra and what we can expect from season two of the show.

Mike Gencarelli: How did you end up landing the leading role of Korra on Nickelodeon’s “The Legend of Korra”?
Janet Varney: Well I have wanted to do voice over for a while but didn’t have a lot of experience in it. I was something that was a dream of mine. I was working well on-camera but like every good dissatisfied artist, what I really wanted to do was something that I wasn’t getting successful in [laughs]. Mostly because the little kid in me was completely fascinated by being a part of cartoons. I met with a few voice over agents and then asked me “What do you like most about voice work? Promos? Commercials?”. I told them basically I just want to do cartoons and they appreciated my honesty. When I got the audition of Korra, it was basically just a normal process for any on-camera role. We even got put together with the other proposed cast to see how the chemistry was, so I got to read with David Faustino and P.J. Byrne. When I found out I got the role, I was in a Jo-Ann Fabrics & Crafts in the Valley, getting crafts supplies. My agent called and told me the news and I ended up screaming and jumping up and down all by myself in an aisle of this fabric store. It has turned out to be one of the best jobs, I have ever had. It is an absolute dream.

MG: Did you look back to “Avatar: The Last Airbender” series” at all?
JV: I was a fan of the original series. I think because of the original legacy of the show and how beloved the series was, I think we all felt like we had a responsibility to the fans to do something that would live up to the original. I so felt pressure that the fans were ok with what I was doing with the character and fulfilling their expectations.

MG: Tell us about your podcast “The J.V. Club”?
JV: The timing on that was really great. I decided to focus on, before Korra took off, a way do a podcast with a unique point-of-view and voice. Fan of Korra are even crossing over to the podcast now as we discuss the challenges of being a young person and then how those challenge present themselves as an adult.

MG: I am a big “Jaws” fan myself, tell us about working with Rifftrax to spoof “Jaws 3”?
JV: Oh yeah, “Jaws 3”. I used to love that movie. What is so great about some of the spoofs we get to do is that when you are younger you don’t necessarily know how bad something is that you like. But you still always seem to love it growing up even though it doesn’t hold up and was terrible to begin with. I still love that movie…sort of…even though it is terrible. It was the perfect movie to riff on. We just recorded “Flatliners” as well, so that will be coming out very soon.

MG: Speaking of spoofing, how did you get involved with Syfy’s “Insane or Inspired?”
JV: It was a super fun show. I had done some “Chelsea Lately” episodes and a few other panel TV shows, so it seemed like such a good fit. It has really been a real hoot some of the things we get to view, which are pretty hilarious. I also love the other people on it like Owen Benjamin and Ben Gleib. We don’t always get to see each out since we are recording at different times but it is still fun.

MG: You must own a lot of the same clothes, since you didn’t change your clothes each episode?
JV: [laughs] The bad thing is that I never realized that they were going to be combining clips over the series of episodes. The second time I showed up, I was wearing something completely different. They said “No, no, no, no…you need to wear the same clothes”. I got real familiar with that outfit and will probably never wear it again [laughs].

MG: When can we expect the second season of “The Legend of Korra”?
JV: We already recorded all of the episodes for the second season. Now, they are just being animated. It takes a long time to create that beautiful animated world. I am not even sure if Nickelodeon is 100% sure when we will be airing it, but I am sure sometime in 2013. I can tell you having recorded the scripts, it is just phenomenal. It is beautiful, interesting and strange. We get to meet some new characters and visit some new places. I am really excited and I think fans are going to love it.