Jonathan Sadowski is the star of the recent Oren Peli produced “Chernobyl Diaries”. Jonathan also star last year in TV’s short-lived “Bleep My Dad Says”. Media Mikes had a chance to chat with Jonathan about his new film and what we can expect.

Mike Gencarelli: What drew you to the “Chernobyl Diaries”?
Jonathan Sadowski: Starting from the audition process the project had a mystique about it. I didn’t really know anything about it as everyone was being very secretive. I did however figure Oren Peli was behind everything. The script was very improv based and we just let our characters run during the audition process.  Bit by bit we told more about the project and by the time screen testing started I knew what the film was about. Brad Parker is an actor’s director. He is very open to working with you. I had no idea the movie was going to be what it turned into.

MG: What did you like most about your character in the film?
JS: My character is the black sheep of the family. Everything that happens in this film is because my character decides to take these people on a tour of this abandoned city. 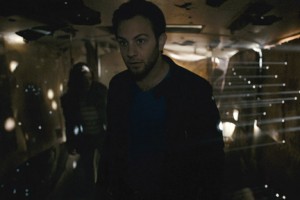 MG: Were the shooting locations challenging at all?
JS: We shot in a few different locations.  We were in Serbia as well as a few different cities outside of Budapest. There was a big language barrier there so communicating was extremely difficult. Trying to eat in restaurants there was really tuff.

MG: What was it like working with Oren Peli and first time director Brad Parker?
JS: For Brad being a first time director he is a pro. I can’t say enough about what he did with the film. He gave us tremendous liberties. Oren was on set every day and was also there during the audition process. The script really came out during rehearsals as it was very improv based. They actually taped the rehearsals and turned it into a script format. Oren was the first person to speak up if something wasn’t perfect. He was really amazing.

MG: Do you enjoy working in a more open environment?
JS: I love it! There are really no rules so you can push the envelope. They can always pull it back but at least you have the liberties to go further with your character. 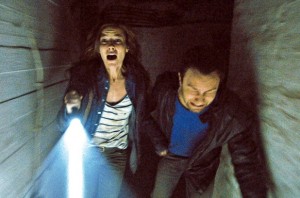 MG: How does your experiences on this film compare to yours from previous works?
JS: The thing that was interesting about shooting this film was the whole secrecy aspect of things. Even when we were shooting we didn’t know what was going to happen or what things were going to look like until we were ready to do them. They were constantly pulling pranks on us to get real reactions.

MG: Can you tell us about any of your other projects?
JS: There is one film that I am in talks to do but the script is still being finished. They are also trying to get me to direct the project as well.