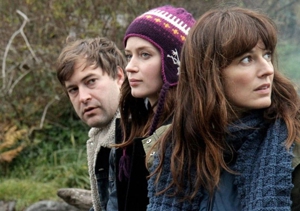 As a group of friends gather to remember their friend, Tom, tensions begin to build. Gone a year, it’s obvious that Tom meant a lot to a lot of people, including his ex-girlfriend, Iris (Blunt) and his brother, Jack (Duplass). After the gathering Iris invites Jack to spend time in her father’s cabin, assuring him the privacy and solitude is just what he needs right now. Jack accepts her offer but when he arrives he finds Iris’ sister, Hanna (DeWitt) already there. They spend a night filled with conversation and tequila. Hanna has just broken up her lesbian relationship while Jack laments his lack of a love life. Almost comically they end up in bed. But when Iris makes an unexpected visit to the cabin herself some secrets are kept while others are revealed.

Solidly acted with a smart script by director Shelton, “Your Sister’s Sister” is one of those small films that it’s a pleasure to discover. Blunt gives a very strong performance here, taking an emotional journey that most fans may not have seen her take in the past. DeWitt, probably best known for her work on “The United States of Tara” and “Mad Men,” is also well cast. But the standout here is Duplass. Better known as the writer/director, with his brother Jay, of films like “Cyrus” and “Baghead,” he makes great use of his talents here. His performance here reveals an actor of many layers. In fact, if Duplass hadn’t already been doing double duty on the recent “Jeff, Who Lives at Home,” he would have been a perfect choice for the title role.

Director Shelton makes good on the promise she showed on her last feature, “Humpday.” Her camera moves in and out of the characters conversations, making the audience feel not like they are eavesdropping but that they are a part of them. Credit also to cinematographer Benjamin Kasulke, who paints postcards of the beautiful scenery of the Pacific Northwest.