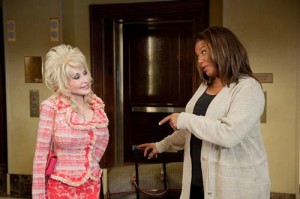 Whether you’re a regular church goer or just drop by on Easter and Christmas Eve, you can’t resist tapping your toes to the music that rises from the choir. In one small Georgia town that choir is run by Bernard Sparrow (Kris Kristofferson), who has guided them to the regional competition of a national Gospel Music contest many times. When Bernard passes away, the pastor (Courtney B. Vance) appoints not Bernard’s widow, G.G. (Parton) but Ms. Vi Rose Hill (Latifah). Vi, a nurse, is raising two children alone, her husband (Jesse L. Martin) currently serving in the Army. Her oldest, daughter Olivia (Palmer) also sings in the choir. However, she and her mother disagree on her style of music. Vi wants all of the voices to blend together while Olivia feels the need to belt out the occasional solo. Son Walter (Dexter Darden) is a young man who has trouble socializing. He has Aspergers Syndrome and is currently fixated on how many one-hit wonders he can name. When G.G.’s grandson Randy (Jeremy Jordan) returns to town the die is cast for a feel good musical. Or a teen love story. Or, possibly, both.

Uneven in every way, “Joyful Noise” is best described as “Sister Act” done by the cast of “Glee” (minus Blaine, thank goodness). Director Graff also penned the screenplay and has apparently decided that all Southern people speak in metaphors. “There’s always free cheese in a mousetrap but the mouse ain’t happy” is a great piece of sage advice that G.G. dispenses. What it has to do with the story I don’t know. Another gem: “it’s like trying to sneak dawn past a rooster,” which was funnier 30 years ago when Sylvester Stallone mispronounced it to Miss Dolly in “Rhinestone.”

I have to give credit to the cast. They seem to be trying hard and the three young leads give fine performances. Cast as the strict mother, Latifah does her best to avoid playing a stereotypical over-protective parent. Parton, who turns 66 next week, hasn’t headlined a film since 1992’s “Straight Talk” and that’s a shame because her personality has always been a plus on screen. The films strongest scenes take place when everyone gathers and lifts their voices. The songs here are powerful. Gospel fans will enjoy hearing not only Latifah and Parton but Gospel legends Kirk Franklin and Karen Peck.

Musical? Love story? I still don’t know. Neither does Warner Brothers, apparently. In the past two weeks their entire television advertising campaign has gone from highlighting the two Oscar nominated stars to featuring the kids with hardly a mention of the adults. If you like Gospel music you might give it a look. If not, I’ll see you in church.