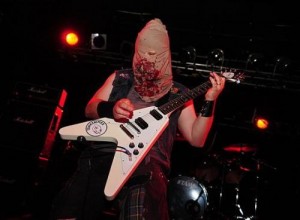 Digestor is the guitarist/vocalist for the thrash metal band Ghoul. The band hails from Creepsylvania by way of Oakland, California and recently released their 5th full-length studio album titled “Transmission Zero”. Media Mikes had that chance to talk with Digestor briefly about the band and their plans for the coming months.

Adam Lawton: Can you tell us how the concept for the band came about?
Digestor: It seemed natural. We are hooded cannibals with limited musical ability who lived beneath a fog-enshrouded graveyard.

AL: Can you tell us about the bands line-up
Digestor: I, Digestor, play guitar and sing, Cremator plays bass and sings, Dissector plays guitar and sings, and Fermentor plays drums. We are also joined by Killbot, Mr. Fang, Baron Samedi, Destructor, and our loyal and idiotic Numbskull. Each of these guys spend most of their time tripping over our cables and unplugging us while spurting various liquids into the slack jawed faces of our fans.

AL: How would you describe the band’s sound? 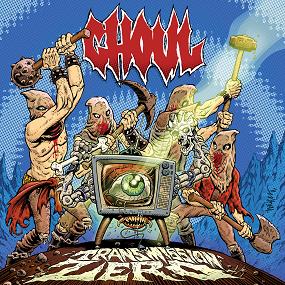 AL: What are the plans for the next Ghoul album?
Digestor: We just put the newest album out about six months ago! Hold your horses, buddy!

AL: The band just finished up a tour run with Gwar and Municipal Waste. What are the bands plans for the rest of the year?
Digestor: At the end of May we will be in Maryland playing the Maryland Death Fest and after that we go to Texas for Chaos in Tejas. We also have a few select dates with Occultist and then Toxic Holocaust!