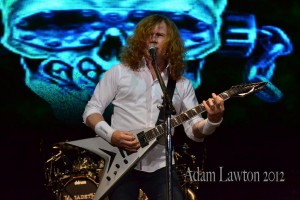 On Saturday May 12th Rob Zombie and Megadeth came to the Toyota Pavilion at Montage Mountain in Scranton, PA. The co-headlining tour featured Rob Zombie, Megadeth and Lacuna Coil. It was a great night for music as the weather was perfect and the secluded hill top setting at the Toyota Pavilion made for a great concert experience.

The Italian rock/metal band Lacuna Coil started the show off and though the venue was still filling up at this point the fans that got there early were treated to a solid performance. Front woman Cristina Scabbia commanded the crowd’s attention which helped take the bands performance to the next level. Megadeth would take the stage next and were relentless in their approach. The band sounded fantastic blasting out song after song. The set was a mixture of newer songs such as “Never Dead” and “Public Enemy No. 1” as well as Megadeth classics “Sweating Bullets” and “Peace Sells”. Dave Mustain interacted off and on with the crowd and he and the rest of the band seemed very appreciate of the crowds applause and reactions. Horror Rock icon Rob Zombie would close out the night backed by his band consisting of John 5, Piggy D and newly acquired drummer Ginger Fish formerly of Marilyn Manson. The band played what could be considered as a greatest hits set, minus a few of the hits to the estimated 4,500 fans in attendance. Though the band sounded decent, I think it’s time for Rob to go back to the drawing board and design a new show. Fans saw an almost exact copy of the 2010 Halloween Hootenanny/Gruesome Twosome show and a similar set list. The brief 12 song set featured staple tracks such “Superbeast” and “Living Dead Girl”. The most notable event of the night came in the way of Zombie’s encore which started off with a pieced together trailer for his new film “Lords of Salem”.

Co-headlining tours are becoming more and more of a staple due to the ever changing economy. This has been both a blessing and a curse. Yes fans get to see several great acts for the price of one ticket however, in the essence of time bands are cutting their sets shorter and shorter. This tour is a perfect example of that. 12 songs by the tour “headliner” is just sad in my opinion. I only hope that if these co-headliner tours continue bands remember that it’s about the quality of the performance not the quantity of the bands on the bill.