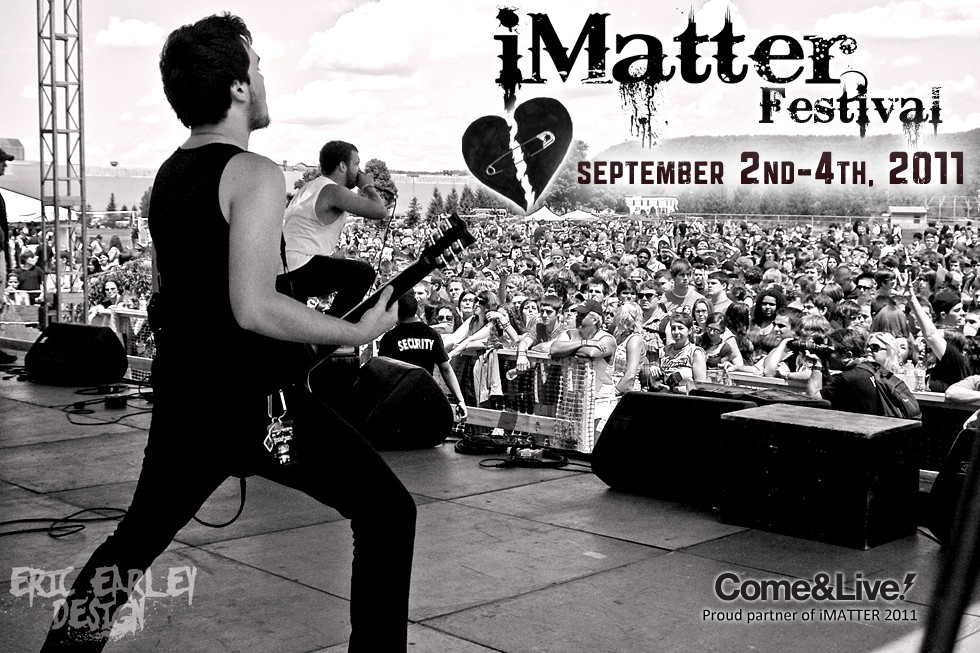 Check out our interviews with Texas In July, Emery and August Burns Red.

iMatter Festival an event held annually for the past 2 years at Eldridge Park in Elmira, NY kicked off on September 2 and ran through September 4th.  The festival is the brain child of Elmira Pastor Scott Lowmaster and is a 3 day event aimed at eliminating suicide among teens in the Upstate NY area. Though the festival sports a faith based theme there is something for everyone at the festival.

I had never gone to iMatter festival prior to this year as I was a bit skeptical about the faith based themes that were present though out the 3 day event. I don’t think there is anything wrong with those themes however it generally is not my scene. This year’s line-up which featured, Emery, Texas in July and August Burns Red to name just a few was enough to put those worries aside and take in the event. Though it was extremely hot as temperatures reach almost 95 degrees the festival was a great experience. All the staff working the various locations throughout the festival grounds were very courteous and friendly. It seemed as though great lengths were taken to ensure a safe and fun event for all those who attended. Each band that performed on Saturday really brought their A game in my opinion. Some highlight performances of the day were put on by The Great Commission, Texas in July, August Burns Red and Emery who even though being stopped mid performance 3 different times due to lightning still put on a solid performance.

I really can’t say enough good things about iMatter Festival and the people who put it on each year. Everyone involved does a really great job providing a safe environment to watch a concert. Combine that with getting some real top notch bands to perform every year and you have iMatter Festival. I will tell you that if you are uncertain about the festival and its thoughts or ideas I say put those aside and come out to the next iMatter Festival. You will not be disappointed!

I would like to send out a big thank you to Scott and Lauren Lowmaster for allowing MediaMikes.com to cover the event.

Saturday Line Up: As Hell Retreats, My Heart To Fear, Gideon, To Speak Of Wolves, The Great Commission, Hundreth,

I, The Breather, Life In Your Way, Texas In July, Impending Doom, A Plea For Purging, Emery, August Burns Red, The Ember Days

Sunday Line Up: The Ember Days