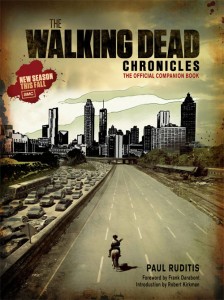 Hey “Walking Dead” fans, this is the first and only authorized, behind-the-scenes guide to your favorite show.  It focuses on the making of the first season of the Golden Globe–nominated TV show.  “The Walking Dead” is a really rare show, it is not your typically television programming yet millions have latched on and love it.  I couldn’t be happier for the show as it honestly deserves it.  Season one is short with only six episodes but that doesn’t mean that this book isn’t packed with content and interesting aspects of the show.

“The Walking Dead Chronicles” is jam packed with amazing illustrated with never-before-seen unit photography, storyboards, set designs, makeup and visual effects shots, and page-to-screen comparisons of the comic and TV show.   It also features new interviews with series creator Robert Kirkman and executive producer Frank Darabont, as well as the cast and crew. Also included is a detailed episode guide, including excerpts from early drafts and final scripts.  Since this show was original based on Kirkman’s comics, it has a lot of room to grow in the future as the comic is still releasing new issues often. This is honestly the best companion book to one of the best shows on television.

This book is guaranteed to satisfy any fan of the show easily.  Paul Ruditis really did a fantastic job of providing a shit load of information as well as making it a very easy read.  Make sure to also check out the fantastic introduction by the creator Robert Kirkman.  I also recommend highly the foreword from Frank Darabont.  They both start off and end this companion book with a bang. If Abrams is reading this review, I have they are going to be releasing a second volume very soon as the second season just ended.