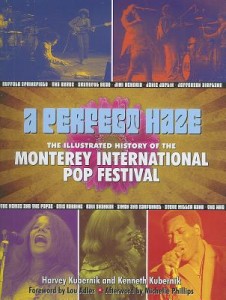 Before Woodstock, the summer of 1967 brought us the Monterey International Pop Festival. It was the first festival where thousands of hippies went to experience the summer of love. The book provides a really great insight into the event where you feel like you were there. There are such detailed documents including copies of telegrams, contracts, newspaper clippings, line-up posters, and other rare memorabilia from the festival. If you are fan of such music icons, such as Grateful Dead, Jimi Hendrix, Janis Joplin, The Who, Jefferson Airplane, and Otis Redding…than this is definitely a book for you, no question.

Besides all the amazing rare photos provided a great behind the scenes look at the festival, there are also many new interviews with musicians like Pete Townshend, Roger Daltrey and some members of the Jefferson Airplane and more! The book is split into seven chapters. What I enjoyed most is that it is a chronicle of each act that performed at the event. It is not just the authors telling us about the events. The first takes us through the preparation and leading up the event. The second chapter takes us through the events of the first night on Friday, which features music from Simon and Garfunkel and Lou Rawls. Chapter three focuses on Saturday afternoon with Canned Heat and The Steve Miller Band as a few of the acts giving their comments on the festival. Chapter 4 focuses on Saturday night with The Byrds and Jefferson Airplane for example. Chapter 5 takes us through the events of Sunday afternoon with detailed accounts from Ravi Shankar. Sunday night, the last night, is covered with biggest names like Buffalo Springfield, The Who, Grateful Dead and Jimi Hendrix. The last chapter takes us through “Monterey Pop: The Movie” and follows D.A. Pennebaker’s account of the festival and working on the film.

The photos in the book really captures the essence of this truly amazing event. I feel that the personal account of each night really draw you into the book and if you close you eyes you can see the bands and here there music. I think that is probably the goal for a book like this one. Whether you were there at the Monterey International Pop Festival that June 16-18, 1967 or whether you weren’t even born, this book is a great tribute to the event. It is a must purchase for fans of this era of music.