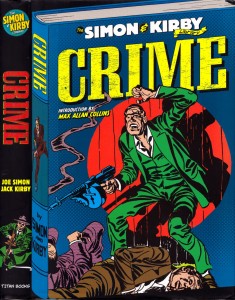 When you think about the comic book duo Joe Simon & Jack Kirby, you just think of a match made in heaven. There wasn’t a genre that the two couldn’t conquer. This compilation delves into the Simon & Kirby Library containing thirty-two stories original published from 1947-49, and two from 1954 & 1955. There are over 300 pages of comics included in this book. The republished comics looks very crisp and just flipping the pages just shows the colorful richness of these stories.

Since there are over thirty titles included, they come from various different platform. There are four stories from 1947’s “Clue Comics”, six from 1947’s “Real Clue Crime Stories”, “Headline Comics” dating from 1947-48 contains the most comics with thirteen, dating from 1947-49 “Justice Traps the Guilty” packs nine comics and lastly two comics from “Police Trap” dating back to 1954-1955. If all those comics aren’t enough for you there is also a spectacular full page cover gallery, including 13 covers.  All in all very impressive and great stories included in this set.

Each story last less than 15 pages at most are short like most 40-50’s serials. The color on the comics are just phenomenal Titans Books did an excellent job restoring these comics on this release and really catered to the fans. Wrapping up this great book is a great introduction by “Road to Perdition” author “Max Allan Collins. His introducing is very insightful and interesting. It also gets you pumped to continue to the next page. If you are a fan of Simon and Kirby, this is a must for your collection.

One Reply to “Book Review “The Simon and Kirby Library: Crime””