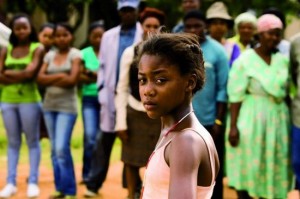 If this film sounds familiar, it should since it was nominated for Best Foreign Language Film at the 83rd Academy Awards. The content of the film is so intense and the acting is even more intense. You almost forgot at times that you are watching a movie and think that this is real. The film itself is based on a book called “Chanda’s Secrets” by Allan Stratton. The film is also in it is native language of Northern Sotho and was shot on location in South Africa…so expect to be reading those subtitles.

The story focuses on a young girl Chandra (Khomotso Manyaka) who is trying to work through the loss of her newly born sister, her mother’s sickness and lack of money. Chandra sets out to help her month and find an answer to her problems. The acting in this film is really great. Khomotso Manyaka gives a very powerful performance, as a first-time actress. I will love to see what she does next and I am sure she has a very bright career. I thought the film ran a little slow but it has a really big heart.

This film is released in a Blu-ray + DVD combo pack, which I really enjoyed. The Blu-ray presentation looks great and really captures the environment really well. When it comes to bonus features there is not much…would have loved a commentary from the director. There is a behind-the-scenes featurette called “The Making of “Life, Above All”, which is only available on the Blu-ray.