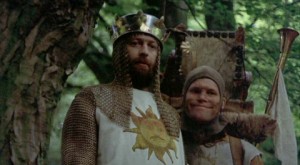 Who doesn’t love “Monty Python and the Holy Grail”. It is easily, Monty Python’s best movie, it just never gets old. I was really looking forward to the Blu-ray release of this film. Don’t forget though “Monty Python and the Holy Grail” was filmed over almost 40 years ago, so the 1080p transfer isn’t perfect but it is DAMN impressive. There is a little grain in the video but it can be overlooked easily since everything else is perfect. The audio track is also very impressive including an DTS-HD MA 5.1 track and also the original 2.0 mono for those who enjoy. Overall, I really enjoyed watching this in high definition.

This Blu-ray also comes packed with many great features including an Ultraviolet digital copy and BD-Live. There is also a feature called “The Holy Book of Days Second Screen”, which uses an iPad to “experience the adventure of shooting Monty Python and the Holy Grail”. It takes you through the 28 days on location with never-before-seen outtakes, stills, original script, diaries, sketches, sounds, and more. This is a really cool feature. In fact there is a sticker on the Blu-ray case issues $5.00 rebate for purchasing the app and the movie, so it makes this a total no-brainer if you have an iPad.

There aren’t a ton of HD special features for this release but what is included is great and will satisfy fans. There are about 13 minutes of “Lost Animations” which is shared by co-director Terry Gilliam. This is exclusive for this Blu-ray release. Included are “Meanwhile, King Arthur & Sir Bedevere…”, “Elephant & Castle; Run Away!”, “The Tale of Sir Robin” and “The Tale of Sir Lancelot”. I am a big fan of Gilliam’s animation and really enjoyed this. There are also almost 20 minutes of high def outtakes & extended scenes including “Sir Robin & The Three Headed Knight”, “Constitutional Peasants”, “Get On With It!”, “Shorter Takes”, “Old Crone, Wedding Slaughter”, and “Lots of Very Silly Bits”.

A major highlight of this Blu-ray also comes from the audio commentary tracks. The first features directors Terry Gilliam and Terry Jones as they discuss the film’s production. It ranges from everything including locations to the cast and the film’s cult following. It is also funny and very entertaining. The next commentary includes the remaining Python with John Cleese, Eric Idle, and Michael Palin. It is much lighter than the first production filled commentary. The group rehash memories and just seem like they are having fun. I would have liked to heard the madness of having the whole group do a commentary track. Overall though these are both equally good and worth checking out for sure.

The rest of the special features are presented in standard definition aka DVD quality. “Quest for the Holy Grail Locations” runs just over 45 minutes and shows Michael Palin and Terry Jones touring the shooting locations today. “Lego Knights” is a recreation of the scene “Camelot’s a silly place” in Lego format. “Japanese Version” includes two classic scenes dubbed in Japanese “The French Castle” and “The Knights of Ni”. “Coconuts” is a laugh riot teaching the equine style. “BBC Film Night” is a archive report from December 19, 1974 including an inside look at the making of the movie, interviews and footage from the set. There is also three sing-a-longs includes to add during the film for “Knights of the Round Table”, “Sir Robin”, and “Monks Chant”. Highly recommended…at least for the first two. Lastly thre is a photo gallery, the US 2001 Re-Release Trailer and the Holy Grail Blu-ray Credits included.