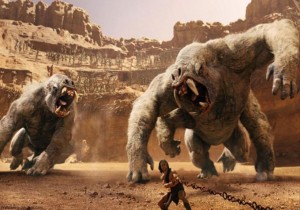 New York City. 1881. A man silently makes his way through town, searching out the nearest telegraph shop. He is aware that he is being followed and quickly loses his tagalong. We are introduced to the recipient of that telegram, a young man named Edgar Rice Burroughs. Seems the man in question has shuffled off this mortal coil and has left everything to master Burroughs. Among the possessions is a journal with a most incredible journey.

Based on Burroughs first ever novel, “A Princess of Mars” (published about a year before his first “Tarzan” adventure), John Carter tells the story of a former Confederate soldier who finds himself in the middle of a civil war on Mars. There he meets all kinds of bizarre creatures with names like Dejah Thoris (Collins – the princess), Tars Tarkas (Dafoe) and Sab Than (Dominic West). Most of the inhabitants of Mars would make great basketball players as they’re about 13 feet tall and have not two but four arms. The story in a nutshell finds the city of Helium being threatened with destruction…a destruction that can be avoided if the Princess marries the suddenly powerful Sab Than, who recently was granted a powerful weapon by Matai Shang (Mark Strong). Confused yet?

Though visually beautiful in 3D, “John Carter” is flat in the story telling department. There really isn’t anything exciting happening on screen. Lots of yelling and fun shots of Carter bouncing around once he gets used to the lack of gravity on the red planet. This is truly a story I’d rather go to the library and read then watch again. Director Stanton has won two Academy Awards for his Pixar films “Finding Nemo” and “WALL-E.” However, in his live action feature debut he seems to forget that his actors are flesh and blood and not animated. They come across as bland rather than exciting. Which is a shame because there are some talented people in the cast. Besides Dafoe and West you get strong turns from Thomas Haden Church, Ciaran Hinds, Bryan Cranston and the aforementioned Mark Strong, who, after recent appearances in “Green Lantern,” “Kick-Ass,” “Robin Hood” and “Sherlock Holmes” must have it in his contract that he appear in every sci fi/fantasy film! As the title character Kitsch is serviceable. But, again, he’s not really given the room to emote. My favorite character was Woola, Mar’s version of man’s best friend. At least he had a personality.