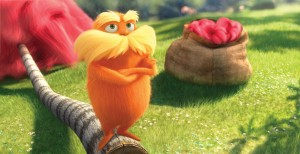 Dr. Seuss has had a bumpy road on the big screen over the years. I really enjoyed “How the Grinch Stole Christmas” with Jim Carrey. Though Mike Myers’ turn as “The Cat in the Hat” was barely watchable. Similar to this film, “Horton Hears a Who” was full CGI and was decent but nothing special. “The Lorax” on the other hand is very enjoyable and perfect for kids to enjoy. I screened the film in 3D and I really did enjoy that experience. It wasn’t overbearing but did add a lot of depth to the film. It is also one “pretty” film, very colorful and vibrant. Overall great family fun and impressive 3D.

The plot definitely aims to deliver a real environmental message but still makes it fun to watch. We follow Ted (Efron), a 12-year-old young boy, who sets out try and win the love of Audrey (Swift) by fulfilling her wish to see a real tree. The city they live in is called “Thneed-Ville”, which does not have any real trees and only artificial. While trying to find a tree for Audrey, Ted meets Once-ler (Helms) who tells him the story of the Lorax. Through the stories we find out what happened to the trees and if there is still hope for this city.

The voice cast is also very impressive. Danny DeVito seems absolutely perfect for the role of The Lorax and easily nails it. Zac Efron and Taylor Swift will both be a big draw to the film with the tweens. Ed Helms is basically the main character besides The Lorax or at least for the first half and he is fun but also easily unlikable. Rob Riggle plays a great baddie and get a lot of laughs.

My main issue with the film is that it has quite a down period where its tone get a little dark.  I understand its purpose due to the film’s message.  Otherwise, it is fun and entertaining throughout. Illumination Entertainment is really showing their muscles and off to a decent start. “Despicable Me” was one of the best films of 2010 and even though “Hop” was a terror to watch, it made money. I am really looking forward to their next film “Despicable Me 2” next summer.