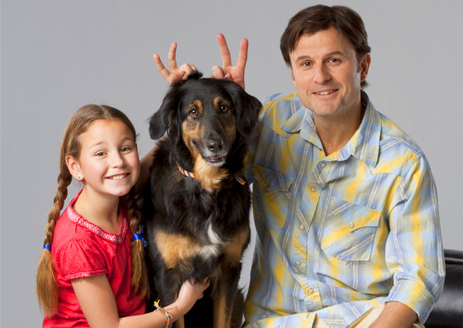 When it comes to family films, they usually hit or miss and usually have no appeal to adults at all. “I Heart Shakey” really brings a little bit for everyone. It has zany over-the-top comedy put still packs a great heart. This film was made on a low-budget and even shot 3D in fact (reviewed 2D here), but it really delivers a lot of entertainment for the whole family.

The film follows J.T. O’Neil, his daughter and their dog Shakey. After moving from a small town to Chicago to pursue his dream job. Though they are forced to get rid of their dog due to bylaws in their rental contract. Of course things don’t work out the way they planned and they realize a valuable lesson about loyalty and the importance of keeping family together.

Steve Lemme gets a chance to shine in this film. He really brings the funny as well as the sweet side of him. It is a real 360 degree turn from his work with Broken Lizard. but a great turn. Philippe Brenninkmeyer, who has worked with Steve and Broken Lizard prior, is absolutely hilarious as Mattias Ober. Beverly D’Angelo and Steve Guttenberg have small roles but are also very funny, especially Guttenberg! Lastly, Rylie Behr really lands her heart as Chandler O’Neil.

I love how they incorporate animated sequences into the film, they are really cute and allow the film to go where the budget won’t allow them. Kevin Cooper, who has worked with James Cameron and Michael Bay, is stepping up to the director’s chair for the first time and really nails his efforts. I really even enjoyed the little extras aspects of this film like added sound effects like twinkling fingers, which adds whimsy to the film.

If you and your family are looking for a simple yet fun film, I would make sure to check out “I Heart Shakey” for a good time. Also fans of Broken Lizard, keep an ear out during the scene when Lemme is driving a Lamborghini!! Who wants a mustache ride?! Check out the film’s official website for more details on where you can see this film, now in theaters and it is available now on video-on-demand. Help support good independent films!